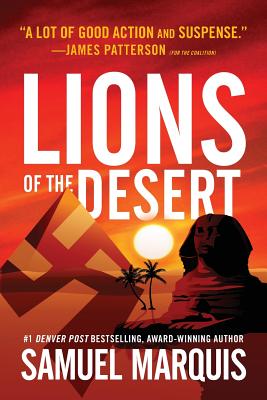 Lions of the Desert

LIONS OF THE DESERT is the true story of the WWII 1941-1942 Desert War in North Africa and Operation Condor, a story that has captivated the minds of authors, historians, and filmmakers for three-quarters of a century.

The story is told through the eyes of six legendary historical figures that lived through the epic events: Scottish Colonel David Stirling, leader of the Special Air Service, a brigade of eccentric desert commandos that raided Axis airfields and supply lines; German Field Marshal Erwin Rommel, commander of the vaunted Africa Corps, who very nearly succeeded in driving the British out of Egypt; Egyptian Hekmat Fahmy, the famous belly dancer, regarded as a Mata-Hari-like German agent in previous accounts but in fact a far more intriguing and ambiguous character in real life; Major A.W. Sansom, head of the British Field Security unit that hunted down Axis spies and pro-German Egyptian nationalists operating in Cairo; Johannes Eppler, the notorious German spy of Operation Condor whose real story is finally told; and Colonel Bonner Fellers, the U.S. military attach in Cairo, who was privy to Allied secrets in the North African theater and inadvertently played an important role in intelligence-gathering activities for both sides in the campaign.

Fans of Beneath A Scarlet Sky, The English Patient, and the WWII novels of Ken Follett (The Key to Rebecca, Jackdaws, The Eye of the Needle) will enjoy this timeless tale of WWII espionage, romance, and derring-do in the North African desert--with the knowledge that this is how it all really happened.