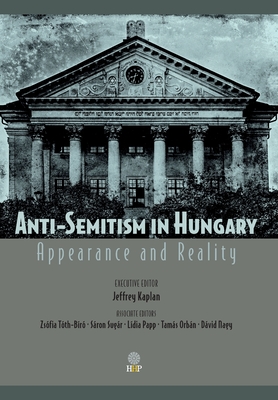 The Anti-Semitism in Hungary: Appearance and Reality Conference was the culmination of a nearly year-long research project on the topic of anti-Semitism in Hungary today. The subtitle of the conference, Appearance and Reality, was selected to test whether Hungary's image in the western media as a country where anti-Semitism is almost in the DNA of the Hungarian people and where the current government manipulates these anti-Semitic feelings for political gain is factual. The research conducted, which included interviews with all the leaders of the various segments of the Hungarian Jewish community as well as with foreign scholars from the EU, Israel and the United States, sought to determine whether the pervasive image of Hungary as anti-Semitic had a basis in reality.

The conference itself brought together the leaders of the primary Jewish organizations MAZSIHISZ and EMIH, along with scholars, journalists, and community leaders, as well as the Israeli Ambassador and scholars from Hungary, Germany, France, Poland and the United States. The results were striking. While the community hardly spoke with one voice, all agreed that the situation for Jews in

Hungary had vastly improved over the last decade and that Jews were more secure in Hungary than in any other country save Israel with a large Jewish population.