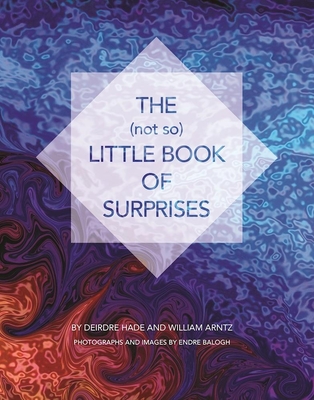 The (Not So) Little Book of Surprises

The (not so) Little Book of Surprises is a verbal and graphic trip to the unexpected, whimsical, and wise worlds of writer and poet Deirdre Hade and her husband and graphic visionary Will Arntz. With images provided by award winning photographer Endre Balogh. These images will inspire you, make you laugh and make you think. The prose and poetry will raise your awareness to the level that great art does when truly enjoyed. You will constantly be surprised and perhaps conclude that this is not such a little book after all. An ideal gift for those on your list who have everything or nothing at all.

CreatorWilliam Arntz began his professional career as a research laser physicist, developing wave optics simulators for high energy lasing systems. He then wrote a systems management software system called AutoSys. Embraced by Fortune 500 companies around the world, he sold his company and retired. Or so he thought... After some months on the beach William became interested in disseminating some of the principles gleaned from his decades of spiritual inquiry to the general public. He realized he could satisfy a life-long dream and use the software proceeds to make a movie. That movie started its life as a small documentary about Spirit and Science, but grew in scope (and budget) and became What the BLEEP Do We Know!? Producing, scripting, and co-directing the film, What the BLEEP went on to become a global phenomenon, with well over 100 million viewers experiencing the BLEEP. The companion book to the film What the Bleep has sold over 150,000 copies and has been translated into 20 languages. AUTHORDeirdre Hade is a Modern Day Mystic. A spiritual adept since childhood she has spent her life communicating with the unseen. As a member of the Transformational Leadership Council her wisdom has been cited, for example, in Marci Shimoff's Love for No Reason. Her work is taught by Jack Canfield, America's Success Coach. Ms. Hade founded Radiance Healing and Meditation in 2007 as a system of mindfulness for our modern time, reaching thousands globally with her Radiance Pure Energy program. Years of deep study into the spiritual traditions combined with a direct perception of what those traditions were alluding to has given her the rare ability to imbue her written worlds with the wisdom of the ages: past, present, and future. PHOTOGRAPHERFrom earliest childhood, Endre Balogh has been an internationally-known concert violinist. He spent much of his career touring the world, playing solo recitals, concertos with orchestras, and chamber music - working with such eminent musical luminaries as Zubin Mehta, Christoph von Dohnanyi, Vladimir Horowitz, and Andre Watts. In 2004, he severely curtailed his touring schedule to spend more time with his wife and children and rapidly began honing his passion for photography. Soon, he was winning top awards in contests, and his unique aesthetic vision and reputation for consistently beautiful work earned him an enviable reputation among his photographic colleagues. His photos are prominently displayed in the collections of several connoisseurs of fine photographic and digital art. In 2016 the California Professional Photographers Association named him Number Two among the Top Ten Photographers in California.
Loading...
or support indie stores by buying on