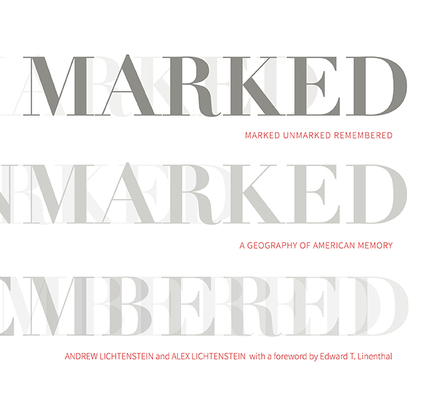 From Wounded Knee to the Edmund Pettus Bridge, and from the Upper Big Branch mine disaster to the Trail of Tears, Marked, Unmarked, Remembered presents photographs of significant sites from US history, posing unsettling questions about the contested memory of traumatic episodes from the nation’s past. Focusing especially on landscapes related to African American, Native American, and labor history, Marked, Unmarked, Remembered reveals new vistas of officially commemorated sites, sites that are neglected or obscured, and sites that serve as a gathering place for active rituals of organized memory.


These powerful photographs by award-winning photojournalist Andrew Lichtenstein are interspersed with short essays by some of the leading historians of the United States. The book is introduced with substantive meditations on meaning and landscape by Alex Lichtenstein, editor of the American Historical Review, and Edward T. Linenthal, former editor of the Journal of American History. Individually, these images convey American history in new and sometimes startling ways. Taken as a whole, the volume amounts to a starkly visual reckoning with the challenges of commemorating a violent and conflictual history of subjugation and resistance that we forget at our peril.

Alex Lichtenstein, current editor of the American Historical Review, is a professor of history at Indiana University. The author of many articles on labor, prison, and civil rights history, his previous work on photography is Margaret Bourke-White and the Dawn of Apartheid.

Andrew Lichtenstein is a photographer, journalist, and educator from Brooklyn, New York. His first book Never Coming Home was published in 2007.

"Andrew Lichtenstein sees history all around, even when it’s not evident at first glance. A pastoral, sun-drenched Mississippi cotton field turns out to be where Emmett Till was murdered. A tranquil suburban subdivision was the site of untold suffering in 1838, when Cherokee Indians had to endure a brutal winter as the government forced them westward on the Trail of Tears. He admits that making pictures of seemingly-ordinary places where tragedy, conflict or rebellion took place isn’t easy. But as has been seen in recent weeks, there has been a growing movement to not just remove memorials honoring Confederate generals but to make sure the counter-narrative is recognized and heard. That sentiment informs his coming book, Marked, Unmarked, Remembered: A Geography of American Memory, which will be published in October by the West Virginia University Press."
New York Times Lens Blog

"A remarkable and essential work of visual documentary history of interest to the scholarly and general reader alike."
Publishers Weekly (starred review)

"A thought-provoking addition to the literature on sites of public memory, complementing titles such as Kenneth Foote’s Shadowed Ground."
Library Journal

“Marked, Unmarked, Remembered is startling and extraordinary. From its images of the past as officials wish us to remember it, to those of a past that is largely unknown to us because those with power have deemed it destabilizing, to the capturing of our past as it has been reclaimed by those invested in rescuing its lessons for the present, this book is a true gift. It both unsettles our sense of who we thought we were, and it makes us see the imperative of forging a more just future for all.”
Heather Ann Thompson, winner of the Pulitzer Prize for Blood in the Water: The Attica Prison Uprising of 1971 and Its Legacy

“When Jacob awoke from his dream of a heavenly ladder in the Book of Genesis, he piled stones to mark the spot. We do much the same today, recognizing certain landscapes as holy or haunted, erecting markers and memorials—piling stones—to conjure or contain their uncanny power. In this quietly moving book, Andrew and Alex Lichtenstein examine some of America’s haunted landscapes, offering a meditation on history, catastrophe, and the wages of memory and forgetting.”
James T. Campbell, author of Middle Passages: African American Journeys to Africa, 1787–2005

“Photographer Andrew Lichtenstein has said that ‘acknowledgment is the first step towards healing.’ In his powerful work, which explores places of historic—and often forgotten—conflict and trauma, he does more than acknowledge. He testifies. He testifies to the past, to the present, to the pains that have broken us—and most of all, to the humanity that defines us. He is setting us on a badly needed path of healing.”
Sara Terry, Founder and Director, The Aftermath Project

“There's an eerie silence that permeates throughout Andrew Lichtenstein's photographs taken at the sites of racial tragedies in the US. These are places where blood was spilled and unspeakable horrors inflicted, the consequences of which we are still grappling with today.”
—Gabriel H. Sanchez, photo essay editor, BuzzFeed News