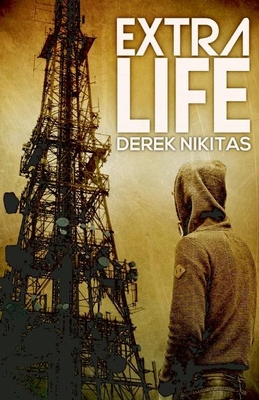 TAKE THE LEAP Russ has never been your typical teen. After being expelled, Russ has started to get his life back on track. He's a pop culture junkie, and living in a town where the popular teen soap "Cape Twilight" is filmed, how could he not be? So when Russ decides to make his own short film, he recruits the (emotionally unhinged) star of "Cape Twilight" and his own motley crew to help out. Seems like a great idea...until the plan blows up in Russ's face. Just when everything seems to be falling apart, Russ receives a message on his cell phone--from himself. Recorded in the future, 'future Russ' informs him that the day can be fixed if he's willing to use an app to leap twelve hours into the past. Russ is happy to oblige, figuring the day can't get any worse. But he couldn't be more wrong. Because as soon as Russ tampers with time and space, he introduces dangerous glitches he can't control, including alternate of himself. And suddenly Russ's sanity and the lives of everyone he cares about are at risk if he can't find a way to regain control of his own life--past, present and future.

Derek Nikitas is the author of the novel Pyres, Minotaur Books, nominated for an Edgar Award. His second novel, The Long Division, was a Washington Post Best Book of the Year. His short stories have been published in such journals as the Ontario Review, Chelsea, Ellery Queen's Mystery Magazine, New South, and The Pedestal Magazine. He holds an MFA in creative writing from the University of North Carolina at Wilmington and a PhD in creative writing from Georgia State University. He is the director of the low-residency MFA in creative writing at Eastern Kentucky University, the Bluegrass Writers Studio, and is currently a visiting assistant professor in creative writing at the University of Rhode Island. He was born in Manchester, New Hampshire, and raised in Fairport, New York. Visit him online at DerekNikitas.com or @DerekNikitas.
Loading...
or
Not Currently Available for Direct Purchase