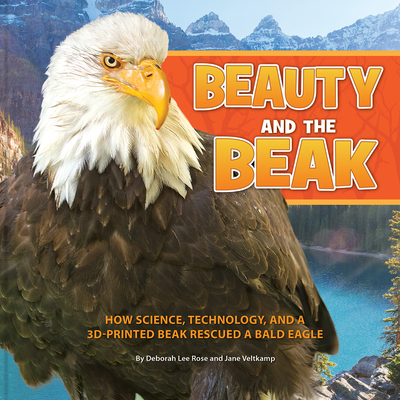 Beauty and the Beak

How Science, Technology, and a 3d-Printed Beak Rescued a Bald Eagle

Three words. 3D. Printed beak. Oh come on, you aren't impressed? Well, check out the back matter on this book and you will be. It's insane --School Library Journal

Beauty and the Beak is the incredible true story about an injured wild bald eagle who received a pioneering, 3D-printed beak--and made world news Follow Beauty close up and in photographs, from the moment she uses her baby beak to emerge from her egg, through her hunt when she uses her powerful adult beak to feed herself, to the day her beak is illegally shot off, leaving her helpless. This brave and uplifting story continues through her rescue, into the months of engineering her 3D-printed prosthetic beak and intense hours of her beak surgery, to the moment she takes the first drink of water by herself with her new beak.

Beauty and the Beak captures the spirit and courage of this amazing bird and America's national symbol--whose species was nearly wiped out by human activity, only to be restored and thriving because of environmental conservation and human compassion. This book will resonate with those who have their own stories of other animals endangered or in need, and humans, from young children to military veterans, in need of prosthetic limbs, who are being given new lives with state-of-the-art devices.

The book includes expanded information about bald eagles as a top predator species, their near extinction in most of the U.S., their successful reintroduction back into the wild, and efforts to conserve this critical raptor species today.

Deborah Lee Rose is an internationally published, award-winning author of many beloved children's books. Her newest book Beauty and the Beak: The Inspiring Story of a Bald Eagle and Her 3D-Printed Prosthetic Beak is a CALIFORNIA READS recommended title of the California Teachers Association. Jimmy the Joey: The True Story of an Amazing Koala Rescue is a Reading is Fundamental/Macy's Multicultural Collection title and Notable Social Studies Trade Book for Students K-12. Into the A, B, Sea was named to the NY Times 100 Books to Read and Share. Deborah helped create and directed communications for the ALA/AASL award-winning, national STEM education website Howtosmile.org, and helped created STEM activity apps for Lawrence Hall of Science, which have been downloaded more than one million times. She also served as Director of Communications for Lindsay Wildlife Experience, which includes the first wildlife rehabilitation hospital established in the U.S. Deborah lives in Silver Spring, Maryland, and speaks at book events, conferences, schools and libraries across the country. Visit her website at deborahleerose.com.Jane Veltkamp is a raptor biologist and rehabilitator, wildlife educator, trained nurse, and master falconer. She led the team who developed Beauty the bald eagle's prosthetic beak and has lifetime care of Beauty, on which Beauty and the Beak was based. Jane is founder and executive director of Birds of Prey Northwest in Idaho, a raptor center which educates the public about raptor conservation, including through live raptor programs, and has provided medical treatment and rehabilitation to thousands of injured birds of prey to return them to the wild. She spent ten years of her career reintroducing ospreys and peregrine falcons to regions where they had disappeared from their habitat in South Dakota and Indiana. She rescues and cares for bald eagles, including Beauty, by permit from the U.S. Fish and Wildlife Service. Jane lives near Coeur d'Alene, Idaho, and is also the eagle expert for the Coeur d'Alene Tribe's Native American Aviaries. Visit her website at birdsofpreynorthwest.org.
Loading...
or support indie stores by buying on