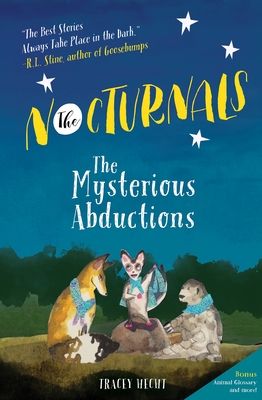 Perfect for fans of Wish and the Pax and Humphrey series, The Nocturnals is a fun-filled chapter book series about three unlikely animals who solve unpredictable mysteries of the night with friendship, teamwork, and humor.

In the first book, The Mysterious Abductions, animals are disappearing without a trace--and it's up to Dawn, a serious fox, Tobin, a sweet pangolin, and Bismark, a pint-sized sugar glider to find out why. With the help of a gentle wombat, a jittery jerboa, a band of coyotes, and some kooky bats, the Nocturnals journey to the depths of the earth and play a wacky, high stakes game that will determine their survival. Bonus full color illustrations at the start of each chapter

GREAT GIFT FOR AGES 9-12 Now an AR Quiz Download complimentary printable activities on the book's website: animal mask crafts, bingo, word games, discussion questions, and Common Core Language Arts and Next Generation Science educator guides.
READ ALL FOUR ADVENTURES WITH THE NOCTURNALS In the second chapter book, The Ominous Eye, Dawn a serious fox, Tobin a sweet pangolin, and Bismark a pint-sized sugar glider investigate a sudden jolt that cracks the earth They meet a mysterious reptile, a tuatara, who claims the beast who caused the crack may strike again. But can this tuatara be trusted? The Nocturnals team up with a fun array of forest animals to uncover the truth