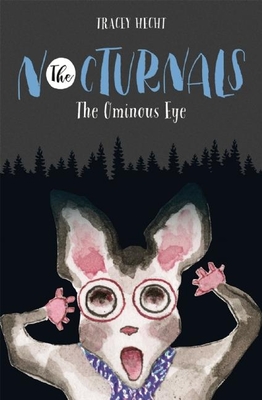 In the second middle grade chapter book, The Ominous Eye, Dawn, Bismark, and Tobin set out to investigate the source of a jolt that fractures the earth Along their journey, the Nocturnal Brigade meets an unfamiliar reptile--a tuatara named Polyphema--who reveals that a giant beast caused the fractures and might strike again. Polyphema, with her special insights, claims she is the only one who can help stop this villian... but can she be trusted? The Nocturnal Brigade teams up with an owl, the jerboas, and some kiwis to set a trap since surrender is not an option. In the end, the Nocturnal Brigade--Dawn, Tobin, and Bismark--solves this mystery and unites the forest. GREAT FOR DISTANCE LEARNING
Download the series's complimentary printable online activities at nocturnalsworld.com: animal mask crafts, bingo, word games, discussion questions, and Common Core Language Arts and Next Generation Science educator guides. Now an AR Quiz
Bonus full color illustrations at the start of each chapter (Ages 8-10) The Nocturnals is a critically acclaimed middle grade chapter book series following three unlikely friends--Dawn, a serious fox, Tobin, a sweet pangolin, and Bismark, a pint-sized sugar glider. Discover the friendships, teamwork, and humor as the Nocturnal Brigade solves the unpredictable mysteries of the night. The adventure continues in The Fallen Star, the third book of The Nocturnals series by Tracey Hecht. When a meteor lands in the forest and all the delicious pomelos suddenly turn bad, the forest animals blame mythical moon creatures. It is up to the Nocturnals to find the earthly explanation and save the hungry animals

Tracey Hecht has written, directed, and produced for film. The American Booksellers Association chose the first book in her critically acclaimed middle grade series, The Nocturnals: The Mysterious Abductions, as a Kids' Indie Next List pick. In addition, her Grow & Read early reader book, The Chestnut Challenge, was given a Mom's Choice Gold Award. In partnership with the New York Public Library, Tracey created a Read Aloud Writing Program that she has since conducted--both in person and virtually--in over 100 schools, libraries, and bookstores across the country. Other books in the Nocturnals middle grade series include The Ominous Eye, The Fallen Star, and The Hidden Kingdom. Tracey currently splits her time between New York City and Oquossoc, Maine, with her husband and four children.
Loading...
or support indie stores by buying on