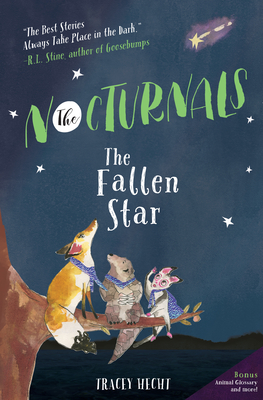 In the Nocturnals third chapter book, Dawn a serious fox, Tobin a sweet pangolin, and Bismark a pint-sized sugar glider wake up to a disaster A meteor has landed in the forest, blue lights glow near the crater, and animals are strangely affected. They meet Iris the aye-aye, a mysterious primate, who warns of a moon monster invasion. But can she be trusted? It is up to the Nocturnals to uncover the real explanation and save the animals
Bonus full color illustrations at the start of each chapter.
GREAT GIFT FOR AGES 9-12 READ ALL FOUR ADVENTURES WITH THE NOCTURNALS The Nocturnals is a critically acclaimed middle grade chapter book series following three unlikely friends--Dawn, a serious fox, Tobin, a sweet pangolin, and Bismark, a pint-sized sugar glider. Discover the friendships, teamwork, and humor as the Nocturnal Brigade solves the unpredictable mysteries of the night.
In the fourth chapter book, The Hidden Kingdom, Dawn, Tobin, and Bismark travel to a distant watering hole and strange things happen along the way. The ground crumbles, water disappears, and huge tumbleweeds chase after them Is the forest alive? When the animals start hearing voices, they begin to wonder: are they imagining things or is something, or someone, else responsible? Only the Nocturnals can solve this mystery and unite the forest