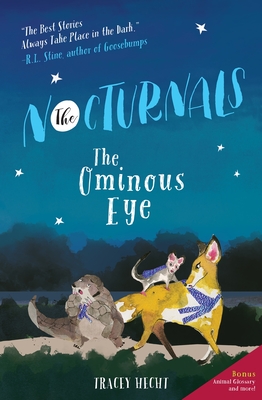 In the Nocturnals second chapter book, Dawn a serious fox, Tobin a sweet pangolin, and Bismark a pint-sized sugar glider set out to investigate a sudden jolt that cracks the earth Along the way, they meet a mysterious reptile, a tuatara, who claims the beast who caused the crack may strike again. But can this tuatara be trusted? The Nocturnals team up with a zany owl, jittery jerboas, and a flock of birds to set a trap to uncover the truth and unite the forest
Bonus full color illustrations at the start of each chapter.
GREAT GIFT FOR AGES 9-12 Now an AR Quiz

READ ALL FOUR ADVENTURES WITH THE NOCTURNALS The Nocturnals is a critically acclaimed middle grade chapter book series following three unlikely friends--Dawn, a serious fox, Tobin, a sweet pangolin, and Bismark, a pint-sized sugar glider. Discover the friendships, teamwork, and humor as the Nocturnal Brigade solves the unpredictable mysteries of the night.
In the third chapter book, The Fallen Star, Dawn, Tobin, and Bismark wake up to a disaster A meteor has landed in the forest, blue lights glow near the crater, and animals are strangely affected. They meet Iris the aye-aye, a mysterious primate, who warns of a moon monster invasion. But can she be trusted? It is up to the Nocturnals to uncover the real explanation and save the animals