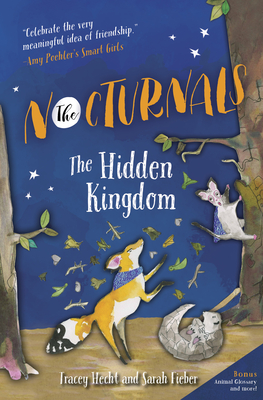 In the fourth middle grade chapter book, The Hidden Kingdom, animals in the valley start to trip on the crumbling ground beneath them, water disappears, and strange voices are heard. Everyone assumes the forest is under a spell. However, it's a group of veiled creatures--a chameleon, stick bugs, leaf bugs, and other assorted camouflaged insects--that are upset because they want the valley's recognition for their hard work in preventing a drought. The Nocturnal Brigade--Dawn, Tobin, and Bismark--solves this mystery and unites the forest. GREAT FOR HOMESCHOOLING Download the series's complimentary printable activities at nocturnalsworld.com: animal mask crafts, bingo, word games, discussion questions, and Common Core Language Arts and Next Generation Science educator guides. The Nocturnals is a critically acclaimed middle grade chapter book series following three unlikely friends--Dawn, a serious fox, Tobin, a sweet pangolin, and Bismark, a pint-sized sugar glider. Discover the friendships, teamwork, and humor as the Nocturnal Brigade solves the unpredictable mysteries of the night. Bonus full color illustrations at the start of each chapter (Ages 8-10)

Tracey Hecht has written, directed, and produced for film. The American Booksellers Association chose the first book in her critically acclaimed middle grade series, The Nocturnals: The Mysterious Abductions, as a Kids' Indie Next List pick. This year, her Grow & Read early reader book, The Chestnut Challenge, was given a Mom's Choice Gold Award. In partnership with the New York Public Library, Tracey created a Read Aloud Writing Program that she has since conducted--both in person and virtually--in over 100 schools, libraries, and bookstores across the country. Tracey currently splits her time between New York City and Oquossoc, Maine, with her husband, four children, and dog, Penny.
or support indie stores by buying on
Copyright © 2020 American Booksellers Association