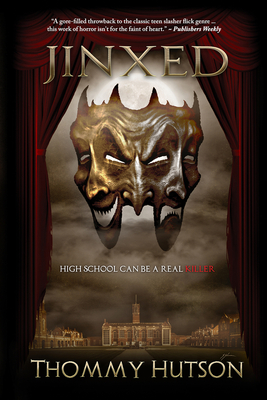 Break a mirror
Walk under a ladder
Step on a crack

But someone at the Trask Academy of Performing Arts is taking things one deadly step further when the campus is rocked with the deaths of some of its star students.

Layna Curtis, a talented, popular senior, soon realizes that the seemingly random, accidental deaths of her friends aren't random—or accidents—at all. Someone has taken the childhood games too far, using the idea of superstitions to dispose of their classmates. As Layna tries to convince people of her theory, she uncovers the terrifying notion that each escalating, gruesome murder leads closer to its final victim: her.

Will Layna's opening night also be her final bow?

Thommy Hutson is an award-winning screenwriter, producer, director, and author who is considered the foremost authority on A Nightmare on Elm Street. A graduate of UCLA, Thommy has written and produced critically acclaimed genre projects such as Never Sleep Again: The Elm Street Legacy, Inside Story: Scream, Crystal Lake Memories: The Complete History of Friday the 13th, Animal, The Id, Truth or Dare, and more. An aficionado of horror and teen movies from the 80s and 90s, he was born and raised in New York but now resides in Vancouver, BC.