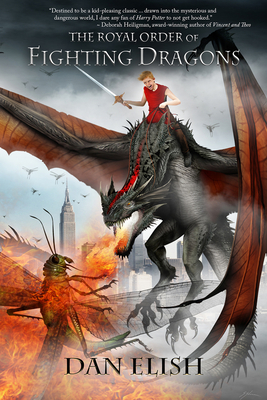 The Royal Order of Fighting Dragons

"Elish delivers a fast-paced, entertaining story with appealing characters, a healthy dose of action, and a dash of humor" ~Publishers Weekly

Ike Rupert Hollingsberry is haunted by the past because complete strangers won't let him forget when his famous father died on the set of The Fighting Dragons, a cult favorite that still has people talking.

But when he's attacked by a large locust, like the one that killed his dad, Ike is helped by the geekiest nerd of all, Elmira Hand.

Killing the giant locust was only the beginning of the surprises in store for Ike as he is whisked away from New York City to an isolated Florida compound to assume his role as the next in line to lead the Royal Order of the Fighting Dragons—that are NOT supposed to exist—and learns his dad's death was a cover-up for a far greater purpose ...

"… destined to be a kid-pleasing classic. Readers will be captivated as Ike is drawn into the mysterious and dangerous world … I dare any fan of Harry Potter, Roald Dahl, Wonder Woman, Superman—any rollicking adventure story—to pick up The Royal Order of Fighting Dragons and not get hooked.
~Deborah Heiligman, Award-winning author of Vincent and Theo

Dan Elish is the author of ten novels includingThe School for the Insanely Gifted, The Worldwide Dessert Contest, and Born Too Short: Confessions of an 8th Grade Basket Case (Simon & Schuster), which was named a New York Public Library "Book for the Teenage" and a "Young Adult Choice for the International Reading Association.” Dan co-wrote the book for the Broadway musical 13 with music and lyrics by Jason Robert Brown, which premiered on Broadway in 2008 and is slated to be a movie by CBS Films. Dan is also a TV writer who has worked on shows such as Cyberchase (PBS) and Jo-Jo's Circus (Disney).

Sam Shearon is a world-renowned artist from Liverpool who has a BA with honours in Visual Communication from University of Leeds in the College of Art & Design, West Yorkshire, England. His work includes IDW Publishing and covers for the Angel series, 30 Days of Night, The X-Files, KISS, Mars Attacks, Judge Dredd, the fully illustrated H.P. Lovecraft's The Call of Cthulhu, Oscar Wilde's The Picture of Dorian Gray, and Clive Barker's Hellraiser and Books of Blood.