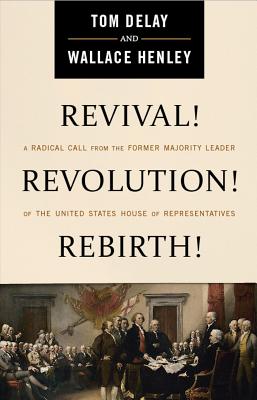 IS AMERICA HEADED TOWARD DEATH OR REBIRTH?

In Revival! Revolution! Rebirth! Tom DeLay, who spent more than two decades in Congress, provides penetrative analysis of what is wrong with this great nation as a former majority leader, he provides fresh solutions for setting things right.

Following DeLay’s quest for God-centeredness in his personal life, Revival! Revolution! Rebirth! is a riveting story of repentance and transformation followed by intense political persecution. Enter the inner sancta of the U.S. Congress as you read about the impeaching of a president, rebellion in the ranks, and the indictments that followed. Find out how the Lord can use a grueling ordeal for his glory. Learn about the biblical cycle of nations and discover some practical ideas for a restoration of original constitutional principles. And as DeLay and former congressional aide Wallace Henley draw from their rich experience, discover the powerful reasons for hope!

Tom DeLay served twenty-two years in the U.S. House of Representatives, becoming Majority Leader. Tom's life was revolutionized in 1985 when he became a committed Christian. Tom and his wife, Christine, are blessed with a daughter, Dani, son-in-law, Chris, and two grandchildren. Wallace Henley is a former White House and congressional aide, pastor, and prolific author. Wallace cut his teeth as a young reporter and editor at the Birmingham News, covering that city’s civil rights upheavals and other social movements in the turbulent 1960s.