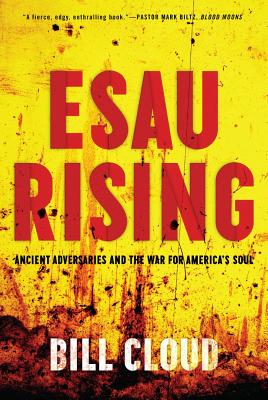 Ancient Adversaries and the War for America’s Soul

"Esau Rising is a masterpiece that will truly impact the lives of those who read it. Esau Rising exposes the spirit of Amalek in our day that wants to destroy Israel and extinguish any light that reveals their self-indulgence lifestyle without regard to the consequences." —Mark Biltz, founder of El Shaddai Ministries and author of Blood Moons

Genesis 25 is the account of the birth of the twins Esau and Jacob. When grown, Esau came in from hunting and smelled the food Jacob prepared and traded his birthright for a bowl of stew. The spirit of Esau is the desire of the flesh and he was willing to trade his entire spiritual heritage for a whim of the moment. Esau, representing the flesh, is the father of the Edomites. Jacob, who became Israel and a prince with God, represents the spirit of righteousness. When Esau traded his birthright in effect Esau said, "I would rather have a bowl of soup than have a relationship with God."

How is this story relevant to Americans today? In today's age of selfies and entitlements, sexual licentiousness and online vilification, and an out-of-control government that is usurping the role of God as the provider and protector, it is clear that the spirit of Esau is dominating our culture. Esau Rising analyzes the characteristics and mind-set of the biblical figure Esau and explains why these traits have prophetic ramifications for our day. Specifically, author Bill Cloud relates them to current political and societal developments transpiring in the world and particularly in the United States of America. Cloud skillfully explains how the spirit of Jacob has always been a light to the nations, a blessing to the people, and he offers hope for restoring righteousness and favor to this great country.

Bill Cloud has served as a youth pastor, chief researcher, writer, and publications director for Perry Stone and Voice of Evangelism Ministries. Cloud is a featured speaker in venues throughout the country and has appeared with notable teachers such as Hal Lindsay, J.R. Church, Jack Van Impe, John Hagee, Grant Jeffrey, Perry Stone, Tim La Haye, and Chuck Missler. Through Shoreshim Ministries, Bill and his family have launched an effort to re-introduce Christians to the Jewish Y’shua and to educate believers in the Hebraic roots of their faith. He and his family reside in Cleveland, Tennessee.