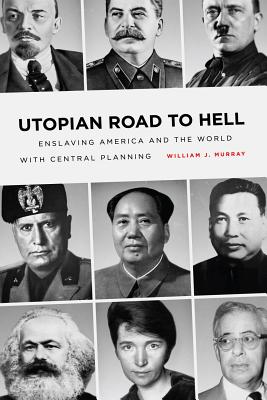 Enslaving America and the World with Central Planning

"William Murray provides a unique perspective that should be read, particularly by America's youth, at a time central planners are once again promising utopian dreams at a cost to the most productive among us.” —Governor Mike Huckabee

Utopian dreamers are deceived and deceiving. Their “fight for the people” rhetoric may sound good at first, but history proves egalitarian governments and the cultures they try to create destroy freedom, destroy creativity, destroy human lives, create poverty and misery, and often spread beyond their borders to bring others under slavery. Utopians believe that through their own personal brilliance a better society can be created on earth. When the belief in man as a creation in the image of God is completely rejected, the use of slavery and mass execution can be justified in the name of the creation of a utopian state for the masses. Pol Pot, Vladimir Lenin, Adolf Hitler, Joseph Stalin, Mao Tse-tung—together these so-called visionaries through their fanciful policies are responsible for the deaths of millions of people.

In Utopian Road to Hell William J. Murray, son of atheist apologist Madelyn Murray O’Hair, describes the totalitarians throughout history and the current utopians who are determined to engage in social engineering to control the lives of every person on earth. From Marx to Hitler, Murray explains the progression of socialist engineering from its occultist roots to the extreme madness of the Nazis’ nationalistic racism. From Margaret Sanger’s Planned Parenthood and Saul Alinsky’s Rules for Radicals, the rebellious desire to be free from morality drives the “at-any-cost” campaigns such as abortion on demand, no-fault divorce, same-sex marriage, and overreaching government provisions. From Woodrow Wilson’s “living document” distortion of the Constitution and his income tax to FDR’s New Deal to Obama’s executive orders, those who seek centralized power typically do so by proclaiming some utopian scheme that they claim will perfect mankind and eliminate competition, greed, poverty, and war.

William J. Murray masterfully educates us on the utopians’ swath of destruction throughout history and warns us of the dangers of present-day utopians fighting to hold power. We must heed the warning of George Washington when he said in his 1796 Farewell Address that it is important for those entrusted with the administration of this great and free nation, “to confine themselves within their respective constitutional spheres, avoiding in the exercise of the powers of one department to encroach upon another.” We must reclaim the freedom of the individual to avoid the continued path down the utopian road to hell.


Praise For Utopian Road to Hell: Enslaving America and the World with Central Planning…

"Utopian Road to Hell details the history of the failures of utopian systems from ancient times to the slaughter of tens of millions of innocent men, women and children in the twentieth century. Raised in a family promoting Marxist utopianism William Murray provides a unique perspective that should be read, particularly by America's youth, at a time central planners are once again promising utopian dreams at a cost to the most productive among us." — Governor Mike Huckabee

William J. Murray is the chairman of the Religious Freedom Coalition in Washington, DC. For more than two decades he has been at the forefront of social conservatism. He continues to work for the rights of Christians in America and persecuted Christians around the world and is the author of seven books.
Loading...
or
Not Currently Available for Direct Purchase