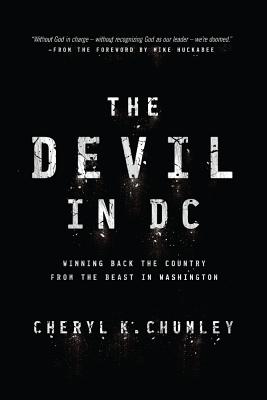 The Devil in DC

Winning Back the Country from the Beast in Washington

Government intrusion into our private lives is at an all-time high. With the Obergefell v Hodges case unelected judges have made law and overturned the will of the people. Bakers, photographers, and even CEOs are all being told what they can and cannot do. Prayer has been banned from public schools for over fifty years, but now even private restaurants are effectively banned from offering incentives to people who pray. This kind of intrusion by the federal government was never intended by the Founding Fathers and is absolutely outside the bounds granted by the US Constitution.

The Founding Fathers themselves said our nation demanded a moral, educated, and principled populace to keep our elected officials in check and to keep our government and culture clean and free of degrading forces, and to maintain its republic roots. Without this, they warned, our country would crumble. Today we see what happens when unchecked, greedy, self-serving utopian politicians get the free run of Washington, DC. We end up with an overreaching federal government whose policies, while wrapped in philanthropic terms, are designed to control and suppress the masses.

In The Devil in DC veteran journalist Cheryl K. Chumley warns of the progressive-socialist and atheist direction America has taken. In a step-by-step guide on what to do about it, Chumley not only explains the issues at hand but offers solutions to the issues: a crippling welfare and entitlement system that reduces the potential of the citizenry; an education system designed to appeal to the lowest performers rather than help all students rise to a higher standard; a broken immigration system that rewards and encourages illegal immigrants, limits the power of the border states, and makes devalues and endangers US citizens; a Federal Reserve that irresponsibly runs up debt by printing money to artificially prop up our economy (and in turn encourages record-level personal debt); and worst of all career partisan politicians who are more concerned with getting reelected and lining their own pockets than in doing what is right for their constituents.

“The Devil in DC is such an important book to read,” explains former governor Mike Huckabee. “[It] takes the fight of patriotic Americans to an even higher level, appealing to Christians and those of faith to get in the ring, jump in the fight. And what I really like about this book is it then shows them just how to do it.” The Devil in DC gives more than a dozen different ideas on how to turn back Big Government and in the spirit of what Founding Fathers envisioned reestablish that our rights our God-granted, not government-given.

Praise For The Devil in DC: Winning Back the Country from the Beast in Washington…

"Cheryl Chumley's Devil in DC hits the nail on the head of what's wrong with America—and then tells how to fix it. She gives clear, concise directions on how to win back the country from the progressives and atheists who've taken over, reminding readers with a most inspiring message: All is not lost, God's still in charge, and the Constitution remains the rule of law." — Michael Savage

"The Devil in DC: How to Win Back the Country From the Beast in Washingtonis a superb guide to making our country once again what it was and should be—a bastion of freedom—and it comes right when it is needed more than ever. The clash of civilizations is only going to get worse, the global jihad is on the march, and we have to sweep out the appeasers and traitors in Washington to make room once again for patriots and lovers of freedom. Cheryl Chumley, in this eye-opening guide, shows how to do just that." — Pamela Geller, president of the American Freedom Defense Initiative and author of The Post-American Presidency and Stop the Islamization of America

"In Devil in DC, Cheryl boldly mixes religion, politics and the history of our founding to blast past partisan politics and show how patriotic Americans can win this great country back from those who seek to destroy it." — Sam Sorbo, Hollywood actress, model, and radio talk show host

"While universities censor speech and stifle debate, Cheryl Chumley courageously tells the ugly truth about how America lost its way. She takes a pointed look at how the nation has succumbed to moral decay and offers a foolproof recipe for redemption. The Devil in DC is a must read for every presidential candidate running to kick the devil out of DC" — Jennifer Wishon, White House Correspondent, CBN News

Cheryl K. Chumley is a full-time writer with The Washington Times. She writes about politics and government for various newspapers, Internet news sites, and think tanks. She is a journalism fellow with The Phillips Foundation, a prestigious conservative organization in Washington, D.C., where she spent a year researching and writing about private property rights.
Loading...
or
Not Currently Available for Direct Purchase