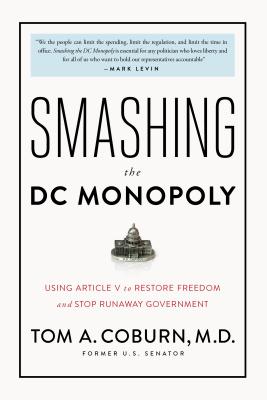 Pork-barrel projects like the $452 million “bridge to nowhere” and Keynesian economic debacles like the $840 billion stimulus package that saved as few as 600,000 jobs ($1.4 million per job) have led to a staggering $20 trillion in national debt—about $150,000 per citizen. With most members of Congress focusing only on their own interests, it’s time to smash the DC elitists’ monopoly and rein in spending and extraconstitutional overreach.

Although the Constitution established a framework for limited federal power and expansive personal freedoms, self-interested politicians and activist court rulings have seriously imbalanced the system. Smashing the DC Monopoly provides the solution to how we the people can finally wrest control away from Washington insiders and back to our local and state representatives.

Having spent more than fifteen years fighting government fraud and irresponsibility, Sen. Tom Coburn reveals that at least $150 billion could be saved annually by eliminating waste and duplication in the federal government. Indeed, while serving on the Simpson-Bowles Commission Senator Coburn worked on a proposal to reduce the deficit by $4 trillion over ten years (which, although a good first step, is but still a drop in the bucket compared to the federal government’s $143 trillion in unfunded liabilities).

Yet the profligate spending and mismanagement continue unabated. In fact, the growth of government has led to a divided, debt-ridden nation of dependent citizens with decreasing personal freedoms. It’s time for the people to take charge.

The Constitution's Framers anticipated a time when self-interested officials would be unwilling or unable to act in the people’s long-term interest. Thus they included the safety feature of Article V that allows the people to propose amendments to the Constitution through the actions of their state legislatures. Already a growing number of grassroots organizations are actively promoting a convention of the states to address issues such as mandatory balancing of the federal budget, term limits on congressional members, and limits on the federal judiciary.

Giving up on the political class, Smashing the DC Monopoly argues for an Article V amendments convention as the best solution to limit the power and scope of the federal government. The book provides the historical background for Article V, reveals past attempts to hold an amendments convention, explains the inherent safety of this process, and examines the current efforts since 2010. Senator Tom Coburn explains how we the people can at last rebalance our governmental system and counter the dysfunction in Washington.

Complete with a list of resources and organization fighting for the people, Smashing the DC Monopoly is your guide to standing up for the next generation and defeating the “me-first” Washington elite who are mortgaging our country’s future.

"Tom Coburn is one of the most remarkable Senators who have served... His whole philosophy and approach to government, had it been more effectively followed by other Members of this body, would have led us to a better country." — Attorney General Jeff Sessions

“The federal government is out of control. It’s time for the states to take back control from Congress, and Senator Coburn explains how in this fantastic book. By amending the Constitution through an Article V convention, we the people can limit the spending, limit the regulation, and limit the time in office. Smashing the DC Monopoly is essential for any politician who loves liberty and for all of us who want to hold our representatives accountable” — Mark Levin

Dr. Thomas A. Coburn was a practicing physician in Oklahoma until 2015. He served as a US Representative of Oklahoma from 1995 to 2001. He honored his pledge to serve only three terms in the House before going back to private practice. Then in 2004 he ran for the US Senate, serving two terms (2005–2014). During his time in office, Dr. Coburn revealed $400 billion per year in waste fraud and duplication. Resigning from the Senate in December 2014 and retiring from the practice of medicine in 2015, Senator Coburn serves as senior adviser to the Convention of States Project (under the aegis of Citizens for Self Governance) and the Nick Ohnell fellow at the Manhattan Institute. He is the author of two books: Breach of Trust: How Washington Turns Outsiders Into Insiders and The Debt Bomb: A Bold Plan to Stop Washington from Bankrupting America.