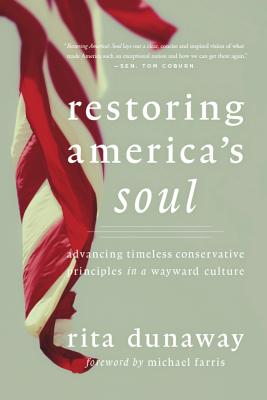 Restoring America’s Soul lays out a clear, concise and inspired vision of what made America such an exceptional nation and how we can get there again.

Today’s culture derides and dismisses the traditional, time-proven values that made America great—so-called conservative values. Liberal professors, the "mainstream" news media, and the Hollywood propaganda machine are brainwashing the nation's youth, convincing them that "conservativism"—the values once held by most of America—amounts to hateful extremism. Nothing could be further from the truth.

The true heart of conservatism is its desire to conserve the timeless principles worthy of being kept and to pursue virtue through disciplined self-governance.

Too many modern conservatives have lost sight of the transcendent goals that made America great and stand out from the rest of the world. Restoring America’s Soul reignites the vision and mission of authentic conservatism and equips busy people to make a fresh and persuasive case for conservative public policy positions on specific key issues.

Restoring America’s Soul examines conservative's current identity crisis and how it has undermined their effectiveness in attracting citizens and motivating them to become both informed and politically active. Contrasting the popular perceptions of the two major parties, Dunaway urges conservatives to focus more energy on telling others what they support than what they oppose. She reminds conservatives of their noble roots, affirming their ideological alignment with the Founding Fathers’ biblical plan for a limited federal government. Rather than solely opposing liberal-left policies, Restoring America’s Soul offers genuine solutions to today's multiple crises. Refreshingly, Dunaway suggests an enlightened course forward for the thoughtful conservative.

Rita M. Dunaway is an attorney who has focused her career on constitutional law. She currently serves as National Legislative Strategist for The Convention of States Project. As an allied attorney with Alliance Defending Freedom, and in her previous position as staff attorney for The Rutherford Institute, Rita has authored numerous briefs for the United States Supreme Court and the United States Courts of Appeals. Her broad expertise in public policy advocacy stems from her considerable repertoire of volunteer work in her community and from years of advocating for conservative public policies at the state level. She is a weekly commentator for WND.com and co-hosts the thirty-minute weekly radio program Crossroads: Where Faith and Culture Meet. Rita lives in Harrisonburg, Virginia, with her husband, Scott, and their two school-aged children.

Michael P. Farris is president, CEO, and general counsel of Alliance Defending Freedom. Farris was founding president of both the Home School Legal Defense Association (1983) and Patrick Henry College (2000) and continues to serve as chairman of the board of HSLDA and chancellor emeritus of PHC. A fixture on Capitol Hill for over 30 years, Farris has testified many times before both the House and Senate.