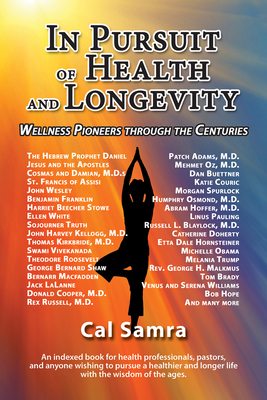 In Pursuit of Health and Longevity

Wellness Pioneers through the Centures

For the past 34 years, best-selling author Cal Samra, age 87, has been the editor of a national humor newsletter called The Joyful Noiseletterdirected mainly to churches and health professionals. Health, physical fitness, and longevity have been the author’s longstanding interests during his years as an Associated Press and newspaper reporter, and as the lay executive director of the Huxley Institute for Biosocial Research, a medical research foundation. But he says he owes his health and longevity to the teachings of the many health pioneers, from long-ago centuries to the present, who are featured in this book.

For the book, this award-winning health and humor historian researched and treaded into the history and teachings of many health pioneers down through the centuries: religious figures of all faith traditions, medical doctors, nurses, health professionals, counselors, agnostic philosophers, bodybuilders, professional athletes, dietitians, and nutritionists, and rediscovered their admonitions on health and longevity which have long since been forgotten or ignored. Starting with the Hebrew prophet Daniel (circa 620 B.C.), he then proceeded down through the centuries to Jesus, the third-century Greek physicians, the Franciscans, John Wesley, Harriet Beecher Stowe, Ellen White, Sojourner Truth, Dr. John Harvey Kellogg, the Hindu Swami Vivekanada, Teddy Roosevelt, George Bernard Shaw, Catherine Doherty, Linus Pauling, Jack LaLanne, Dr. Donald L. Cooper, M.D., Dr. Rex Russell, M.D., Patch Adams, M.D., Dr. Mehmet Oz, M.D., Etta Dale Hornsteiner, professional athletes like Tom Brady, and Serena and Venus Williams, Bob Hope, and many others. All of them were extraordinary men and women from numerous faith and philosophical traditions. They were Jewish, Catholic, Eastern Orthodox, Protestant, Hindu, Buddhist, Moslem, and agnostic, African-Americans, Native Americans, and Mexican Americans. Many were immigrants or the children of immigrants.

Some were conservatives and some were liberals, but they all had a zest for life and a meeting of minds on living a healthy lifestyle. It is amazing how much they agreed upon. Many of these men and women regarded themselves, or were regarded, as health reformers. Their basic advice on living a healthy lifestyle was generally the same: eat fresh, natural, nutritional foods in moderation, exercise your body regularly, get sufficient sleep, keep your faith and your sense of humor, and strive to be a loving, caring, giving and forgiving person.

The focus of all these health reformers was living a healthy lifestyle. Many of these health pioneers were ignorant of the work and views of their predecessors, or chose to ignore them. It is altogether human to be reluctant to give credit to individuals outside one’s own faith or philosophical tradition. But ironically, some of the research of modern science is confirming the views of these prophetic health pioneers.

This book is the first book to attempt to trace the history of health pioneers, both religious and secular, down through the centuries, and to introduce them to readers. It is indexed and designed to be a resource book for medical doctors, nurses, chaplains, pastors, counselors, nutritionists, physical therapists, body-buildings, editors, comedians, clowns and anyone wishing to live a healthier and longer life.

Samra pleads with religious organizations to pay more attention to the pollution of our air, water, and food supply, which is eroding the health of people and congregations. “While you are teaching people how to get to Heaven, how about teaching them healthy lifestyles to survive on this earth?” he asks.

Several of the cartoons from The Joyful Noiseletter have been reprinted in this book.

Cal Samra is the founding editor and publisher of The Joyful Noiseletter, a national newsletter which for 31 years has brought good humor and good cheer to churches and families.  He is a former newspaper reporter and columnist, the former lay executive director of a medical research foundation, and the author of a dozen books, including Holy Humor, More Holy Humor,Holy Hilarity, and More Holy Hilarity, which have sold over a million copies. An enthusiast for tennis and the Mediterranean diet that Jesus ate, he lives the message in his newest book,The Physically Fit Messiah.