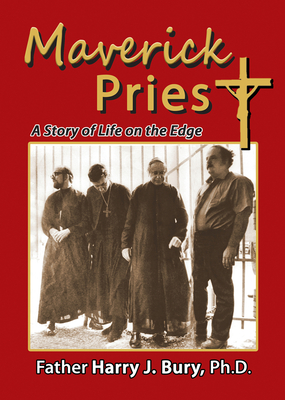 A Story of Life on the Edge

This is the story of one man’s unique journey around the world, in the name of human connection, peace, and active nonviolence.

Father Harry J. Bury is a Catholic priest unlike any you have ever met. His travels through Thailand, Vietnam, Cambodia, Hong Kong, India, Costa Rica, Philippines, Africa, Palestine and Israel, span over 60 years. His life-long dedication: to interact lovingly with citizens of the world in pursuit of peace and nonviolence.

His determination to help his fellow human beings put him in sometimes compromising and often dangerous situations with American law enforcement, foreign governments, and the church alike.  He was:

Father Bury’s life reads like an adventure novel.  But this is not fiction.  It is the testament of a life lived to make a difference. Against all odds, with unwavering faith, he carries his message of love, peace, and non-violence as a priest, political activist, and warrior for peace.

Nearing his 90th year, Father Bury puts his story on paper, hoping it will inspire and encourage all who care about humankind living in peace and without violence, to carry the message, do the work, continue the struggle, and never give up.

Harry J. Bury is an American Roman Catholic priest and Professor Emeritus of Organizational Behavior and Administration from Case Western Reserve University. He taught at Baldwin Wallace University from 190–2010 and consulted not only in the U.S. but also numerous other countries.

Bury’s activism started as a new priest serving at the University’s Newman Center in the 60’s when young Catholic men asked him to write a letter for them as conscientious objectors for the Vietnam War. In 1971, at the request of some Vietnamese, he and three others chained themselves to the U.S. Embassy gate in Saigon to protest the Vietnam War. In 2005, Harry was abducted in Gaza while serving as a human shield between Israeli soldiers and Palestinian citizens.

Bury believes in dialogue and compromise between people in the community and around the world. In his 88 years, he has never hesitated to “risk the worst in order to achieve the best.”

Connie Anderson a profession editor from Minneapolis, has a long professional history of editing books, not only proofreading, but doing developmental editing.