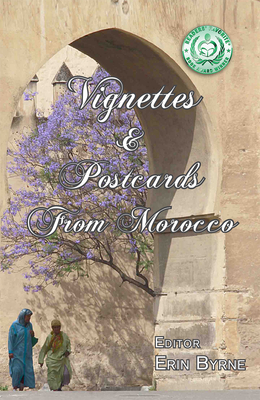 Vignettes & Postcards From Morocco is an anthology of writings edited by Erin Byrne (Wings). From Fez to Marrakech, Casablanca to Tangier, The Atlas Mountains to the Sahara Desert, writers Suzanna Clarke (A House in Fez), Phil Cousineau, Paul Bowles, Michael Chabon and others seek the ancient and celebrate the exotic in Morocco. Sketches by Anna Elkins. Photographs by Siddharth Gupta and Omar Chennafi.

Erin Byrne is author of Wings - Gifts of Art, Life, and Travel in France (Travelers’ Tales, 2016), winner of the Paris Book Festival Award for travel genre, editor of Vignettes & Postcards From Paris and Vignettes & Postcards From Morocco (Reputation Books, 2016), and writer of The Storykeeper film.
Erin’s travel essays, poetry, fiction and screenplays have won numerous awards including three Grand Prize Solas Awards for Travel Story of the Year, the Reader’s Favorite Award, Foreword Reviews Book of the Year Finalist, and an Accolade Award for film.
Erin is occasional guest instructor at Shakespeare and Company Bookstore in Paris and teaches on Deep Travel trips. Her screenplay, Siesta, is in pre-production in Spain, and she is working on the novel, The Red Notebook. www.e-byrne.com

Praise For Vignettes & Postcards From Morocco…

“The stories in this mesmerizing collection will make you ache to travel throughout Morocco, and will sustain you until your next, or first, visit.” —Larry Habegger, executive editor, Travelers’ Tales Books

“Whether it’s Jeff Greenwald’s encounter with the kif-smoking Paul Bowles in Tangier, or Rolf Potts wandering a city he arrived in only by mistake, or Christina Ammon’s quest for contraband Cabernet – or even the recipe you’ll find for camel burger (don’t forget the chopped mint) -- the contents of this book are sure to stoke your wanderlust..” —Jim Benning, co-founder of World Hum

“Some of my favorite writers create an evocative picture of a wonderfully diverse country. It’s not about where to go; it’s about how to think about it when you do. This a recommended read, unless you’re going there in the near future, it which case it is mandatory.” —Tim Cahill, author of Jaguars Ripped My Flesh and Hold the Enlightenment