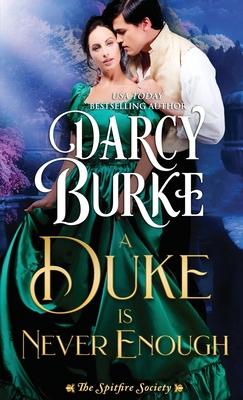 A Duke is Never Enough

From the USA Today bestselling author of The Untouchables series comes your next Regency obsession: The Spitfire Society... Meet the smart, independent women who've decided they don't need Society's rules, their families' expectations, or, most importantly, a husband. But just because they don't need a man doesn't mean they might not want one.

Notorious rake Marcus Raleigh, Marquess of Ripley, is gracing the gossip pages for a new reason: the rumors he may have murdered his swindling cousin. His quest for answers regarding his cousin's death leads him to an incomparable self-declared spinster, and he is--for the first time--beguiled beyond reason. Neither is what the other wants, and yet their intense mutual infatuation is inescapable.

After abandoning her philandering betrothed at the altar, Phoebe Lennox fled from London only to return an heiress who refuses to follow the ton's rules. She won't risk a relationship of any kind--until she meets the scandalous Marquess of Ripley. Swept into his seductive embrace, her resolve falters in the face of a pleasure she never anticipated. But when the truth about Marcus and the murder come to light, Phoebe could lose everything she holds dear, including a love for all time.