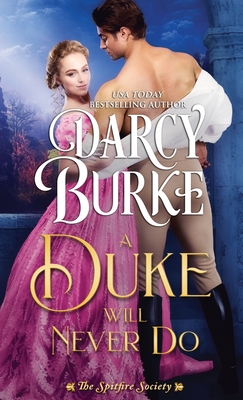 A Duke Will Never Do

From the USA Today bestselling author of The Untouchables series comes your next Regency obsession: The Spitfire Society... Meet the smart, independent women who've decided they don't need Society's rules, their families' expectations, or, most importantly, a husband. But just because they don't need a man doesn't mean they might not want one.

After failing on the Marriage Mart, Jane Pemberton has two choices: submit to her parents' edict to marry their boring neighbor or become a self-declared spinster and take up residence in the official headquarters of the Spitfire Society. It's really no choice at all, and Jane is eager to embrace her newfound independence. She soon finds an unconscious viscount on her doorstep and nurses him back to health. When he offers to compensate her, she requests payment in the form of private instruction of a scandalous and intimate kind.

Having spiraled into a self-destructive abyss following the murder of his parents, Anthony, Viscount Colton, physically recovers under the care of an alluring spitfire. But it is her charm and flirtatiousness that soothes his soul and arouses his desire-until an extortion scheme forces him to face the sins of his past. Now, to save the woman who's given him everything he lost and more, he'll have to pay the ultimate price: his heart.