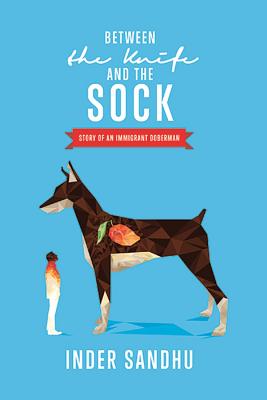 Between the Knife and the Sock

Story of an Immigrant Doberman

“Here is the thing about people we love—they either scar us for life or save us from impending doom.”

Inder lives in a picturesque town in India, far from the dismal conditions of those less fortunate. However, nowhere is he completely safe from the crime and violence that clings to his country’s underbelly. He soon finds himself on the receiving end of a brutal attack in the streets.

While his body survives, his soul suffers and his mind dwells in darkness. Recovery is long; the outside world is unforgiving, and whatever happiness enters young Inder’s life is quickly squashed by his desire to simply wallow in his depression.

Then one day Speed, a new Doberman puppy, becomes part of Inder’s family. Though he is slow to embrace this new addition, Inder finally warms up to the puppy. A bond is formed between them that brings Inder back into the light.

Soon they are off, man and dog, on an international, existential adventure; a life-changing adventure Between the Knife and the Sock.

Inder Sandhu has been volunteering at animal shelters over the past eight years and is involved in several rescue organizations as an Adoption Counselor, Fundraising Manager, Educating and Information Manager along with serving on volunteering and fundraising committees. He is a Mechanical Engineer by trade, has an MBA in marketing and has held several positions as Marketing Manager for engineering products. Some of the organizations he represents are: Abandoned Animal Rescue, Tomball, Houston Area Doberman Rescue, Desert Harbor Doberman Rescue, Home fur’ Good, SPCA Chandigarh, People for Animals, People in Defense of Animals and others.

Inder also writes columns in newsletters for rescue organizations, has had articles published in Indian daily newspapers (Hindu and The Tribune) and has some articles due to be published in Doberman Pinscher magazine. He has also been a guest on radio in Houston for volunteering opportunities within the Indian, Pakistani communities in the US. In addition, he posts on a blog page www.indersandhu.com. He is also a part of several online rescue groups both in India and the US (Pablo’s Doggy Rescue, Society of Prevention of Cruelty to Animals, International Animal Rescue Goa and others) and is a frequent speaker at Abandoned Animal Rescue and Houston Area Doberman Rescue in Texas.