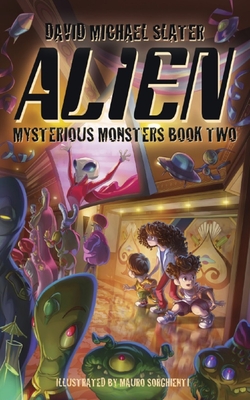 With Bigfoot safely stashed in their basement, Maddie, Max, and Theo Mattigan are off to Las Vegas with their dad. His plan is to prove there are no aliens on the loose there.

But now that his kids know Mysterious Monsters are real, they're making plans of their own. They'll need clever disguises, a well-hidden walkie-talkie—and more than a few broken eggs—to find out once and for all what's hidden in the notorious Area 51.

David Michael Slater is an acclaimed author of books for children, teens, and adults. His work for children includes the picture books Cheese Louise!, The Bored Book, and The Boy & the Book, as well as the on-going teen fantasy series, Forbidden Books, which is being developed for film by a former producer of The Lion King. David's work for adults includes the hilarious comic-drama, Fun & Games, which the New York Journal of Books writes "works brilliantly." David teaches in Reno, Nevada, where he lives with his wife and son.

Mauro Sorghienti grew up in Porto San Giorgio, a charming Italian town on the Adriatic coast, where he found inspirations reading old fantasy stories and ancient myths from northern Europe. Not far from there, is the State Institute of Art where he learned the basics of his craft before changing paths and graduating as a Childhood Communities Assistant. However, the graphic arts were always his main passion and soon he was able to make that his main occupation. He has gained his twenty years of experience in illustration and cartooning, playing creative roles for many projects from the earliest stages of their development on to completion. He loves drawing, painting, and when he is in the mood, also modeling odd tangible things. Sometimes, he also has a bit of free time to spend on his hobby as a board games enthusiast!