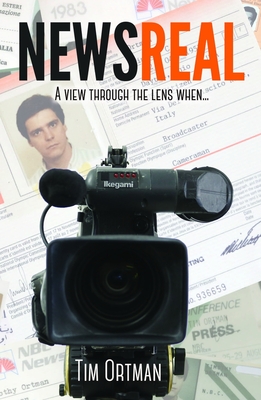 In today’s thousand-channel, blog-heavy news environment, it’s tough to envision a time when everyone was, more or less, on the same page; when news coverage was less contentious and delivered in a straightforward fashion. NewsReal is a view through the lens to when such a time did truly exist. Recalled by Emmy Award winning cameraman and producer, Tim Ortman, NewsReal relives a time when the news landscape was owned by the 'Big 4' networks. With their vast assemblage of domestic and international bureaus, enormous budgets and loyal viewers, they were everywhere and anywhere news happened--and as an NBC cameraman, Ortman found himself at the frontlines of these stories. In today’s world, the same fact-based reporting competes with an increasing interference from talk show interpretations and online opinions. NrewsReal evokes a time void of that noise. A time when anchormen were more trusted than presidents, the reporting was riveting, the stories were real, and ‘Fake News’ was nowhere to be found.

Tim Ortman has spent 35 years - a lifetime, working in television news, having worked for all major U.S television news networks (NBC, ABC, CBS, CNN, FOX) and the BBC. As an Emmy nominated and award-winning Cameraman and Producer, his understanding of the overall television production process is comprehensive; with four decades of experience shooting, lighting, editing, story editing, writing and producing. However, his chops were truly made on the front lines of news as part of the Foreign Press Corps. Based in Europe during the 80’s as an impressionable 20-something staff cameraman for NBC News, his understanding of and appreciation for the news biz was formed when the news biz was at its most trustworthy zenith. His globe-trotting travels have taken him on assignments in five continents, covering everything from presidential elections to Papal visits, Olympiads to Olympic Park bombings, war, revolution, famine, terrorist attacks, Cold War Summits, the fall of Communism and the occasional press conference. He has been fortunate to have occupied a front row seat on numerous historically significant happenings. Many of those stories are re-told, with an often-humorous reflection, in the pages within this, his memoir. “All politics is local” …the same approach to news…local news as actually global news; events in Lebanon impacted the US and news in China had a ripple effect in America.”