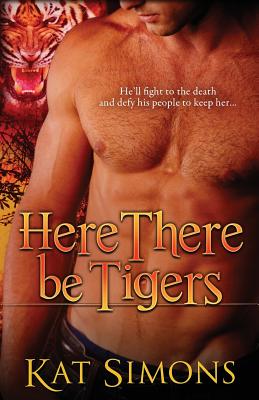 Here There Be Tigers

She shouldn't exist. When Nila De Luca finds out she's the impossible offspring of a human father and a tiger shifter mother, she knows her life will never be the same. She refuses to be a pawn in tiger politics or to have her future dictated by other people's agendas. But before she can settle into her new life, she has to survive the vicious attacks of her mother's mate and the covetous grab of a crazy tiger determined to use her for his own purposes. Her only ally is a sexy tiger shifter, a man she wants more than any other before, and with a passion that calls to her animal side. He can't have her. Mitch Chernikov knows exactly how important Nila is to his people. She represents hope for their continued survival. His sole job is to keep her alive so she can fulfill that promise. He knows he won't be allowed to keep her for himself. That knowledge doesn't stop him from wanting her. Or from answering the passion that burns so fiercely between them. But to keep her, he'll have to fight for her. And it will be a fight to the death.

Kat Simons earned her BA in Zoology studying dolphins in Hawaii and her Ph.D. in animal behavior studying deer in Ireland. She takes that background and turns nature on its ear in her paranormal romances. Her Tiger Shifter series follows the struggles of the tiger shapeshifters to survive in the face of extinction and how they handle love, lust and survival. When not writing, Kat loves to read, bake, travel, play with her sons, and go to sporting events with her husband and sons. She also plays entirely too much Sudoku. Currently, Kat lives in New York with her family and a library's worth of books.
Loading...
or support indie stores by buying on