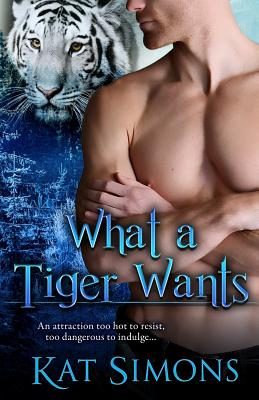 What A Tiger Wants

An attraction too hot to resist, too dangerous to indulge...

Tiger shifter Dmitry Chernikov fell in the love with his brother's head waitress the moment he saw her. Jane Emmerson is sexy, smart, stubborn...and absolutely perfect for him. Unfortunately, Jane makes it clear she's done with men. All men. For six years, Dom has fought his feelings for the beautiful human woman, and for six years he's managed to keep the peace between them. But when a family reunion brings him back to Eirene, Colorado--to Jane--six years of resistance crumble. Now he has to overcome her determination and convince her they're meant for each other.

Jane Emmerson has very bad taste in men. If she's attracted to a man, it's a sure sign he's bad news. When she moves back to Eirene after yet another disastrous relationship, she promises herself she's done with romance for good. Then she meets Dom Chernikov. The deliciously sexy Dom tests her determination to remain single. Unfortunately, the very fact that she wants him means there must be something wrong with him. She can't risk her heart again, not after working so hard to build a life for herself and her son. She doesn't need a man. But oh, does she want this one.