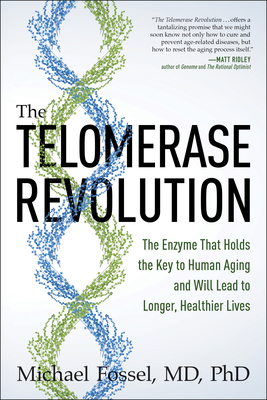 The Enzyme That Holds the Key to Human Aging . . . and Will Soon Lead to Longer, Healthier Lives


Science is on the cusp of a revolutionary breakthrough. We now understand more about aging—and how to prevent and reverse it—than ever before.

In recent years, our understanding of the nature of aging has grown exponentially, and dramatic life extension—even age reversal—has moved from science fiction to real possibility.

Dr. Michael Fossel has been in the forefront of aging research for decades and is the author of the definitive textbook on human aging. In The Telomerase Revolution, he takes us on a detailed but highly accessible scientific journey, providing startling insights into the nature of human aging.

Twenty years ago, there was still considerable debate of the nature of human aging, with a variety of competing theories in play. But scientific consensus is forming around the telomere theory of aging. The essence of this theory is that human aging is the result of cellular aging. Every time a cell reproduces, its telomeres (the tips of the chromosomes) shorten. With every shortening of the telomeres, the cell's ability to repair its molecules decreases. It ages. Human aging is the result of the aging of the body's trillions of cells.

But some of our cells don't age. Sex cells and stem cells can reproduce indefinitely, without aging, because they create telomerase. Telomerase re-lengthens the telomeres, keeping these cells young.

The Telomerase Revolution describes how telomerase will soon be used as a powerful therapeutic tool, with the potential to dramatically extend life spans and even reverse human aging. Telomerase-based treatments are already available, and have shown early promise, but much more potent treatments will become available over the next decade.

The Telomerase Revolution is the definitive work on the latest science on human aging, covering both the theory and the clinical implications. It takes the reader to the forefront of the upcoming revolution in human medicine.

Praise For The Telomerase Revolution: The Enzyme That Holds the Key to Human Aging . . . and Will Soon Lead to Longer, Healthier Lives…

"To those curious about telomerase therapy and its potentially earth-shaking implications, this book is definitely worth a read."

"The Telomerase Revolution is a remarkable book, telling a fascinating story that pulls together at last a single coherent theory of how and why growing old leads to so many different forms of illness. It also offers a tantalizing promise that we might soon know not only how to cure and prevent age-related diseases, but how to reset the aging process itself. Michael Fossel is a radical optimist."
—Matt Ridley, author of Genome and The Rational Optimist

"Telomerase Therapy breaks down centuries of human thought on aging and uproots outdated ideologies that have led to nothing but worthless snake oil products. Dr. Fossel's exciting book is opening doors to extended healthspan that can change human history, and it's all grounded in solid scientific research."
—Noel Patton, founder and chairman of TA Sciences

"Michael Fossel's compelling argument for the telomere approach to reversing aging isn't just worth a look—it's like reading the words of Virgil as he leads us along the mysteries of aging."
—Alexey Olovnikov, PhD, Institute of Biochemical Physics and Russian Academy of Sciences

"Aging is not an irreversible degenerative process, but an epigenetically determined physiological mechanism, which must not be confused with age-related diseases caused by lifestyle choices. Here, we have an effective and clear guide to understand how we get old and how to tame aging in a few years."
—Giacinto Libertini, MD, member of the Italian Society of Evolutionary Biology

"As a follow-up to his previous publications on the subject, Dr. Fossel brings the reader up-to-date on the progress made in understanding the central role of the telomere in aging. . . . Although a couple of decades of effort have ensued and candidate interventions have emerged, there are no strong and clinically proven interventions at the fore; however, Dr. Fossel constructs a very optimistic but realistic view of what may be on horizon to create the Telomerase Revolution."
—Donald K. Ingram, PhD, professor at the Nutritional Neuroscience and Aging Laboratory, Pennington Biomedical Research Center

Dr. Michael Fossel earned both his PhD and MD from Stanford University, where he taught neurobiology and research methods. Winner of a National Science Foundation fellowship, he was a clinical professor of medicine for almost three decades, the executive director of the American Aging Association, and the founding editor of Rejuvenation Research. In 1996, he wrote the first book on the telomerase theory of aging, Reversing Human Aging, describing the medical aspects of extending human telomeres, reversing aging, and curing age-related disease. In 2004, he authored the magisterial academic textbook, Cells, Aging, and Human Disease, and in 2011, he coauthored The Immortality Edge, a bestselling discussion of the potential for extending the human lifespan. He currently teaches The Biology of Aging at Grand Valley State University.

The world's foremost expert on the clinical use of telomerase for age-related diseases, Michael has lectured at the National Institute for Health and the Smithsonian Institute, and continues to lecture at universities, institutes, and conferences throughout the world. He has appeared on Good Morning America, ABC 20/20, NBC Extra, Fox Network, CNN, BBC, Discovery Channel, and regularly on NPR. He is currently working to bring telomerase to human trials for Alzheimer's disease.
Loading...
or support indie stores by buying on