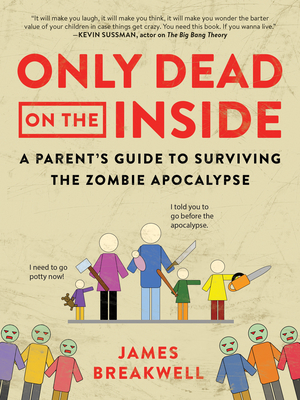 Only Dead on the Inside

A Parent's Guide to Surviving the Zombie Apocalypse

It's not easy being a parent these days. There are bills to pay. Kids to feed. And hordes of undead monsters to keep at bay.

There are plenty of guides out there about how to survive the zombie apocalypse. All of them assume readers are young, fit, and unencumbered by children. In that scenario, the only living humans left will be smug, outdoorsy Millennials. That's hell on earth, even without the zombies.

Only Dead on the Inside is the answer for the rest of us.

Written by professional comedy writer and amateur father-of-four James Breakwell (@XplodingUnicorn), Only Dead on the Inside blends traditional parenting advice with zombie survival tips, bringing together two totally unrelated genres in a book no one asked for but everyone needs.

This step-by-step manual teaches you how to raise happy, healthy children in a world overrun by the undead. Motivated moms and dads want it all, and that won't change at the end of the world. There's no reason you can't be a zombie killing machine AND parent of the year, but you have to work for it.

If you want to make sure your family is apocalypse-ready, Only Dead on the Inside is your best―and only―chance at survival. No pressure, but if you don't read this book, your children will die.

James Breakwell is a professional comedy writer and amateur father of four girls ages 6 and under. His Twitter account @XplodingUnicorn has more than 640,000 followers who check in with him daily as he fails as a parent and a human being. Breakwell's comedy went viral in April 2016 when Buzzfeed featured his kid-centric jokes in an article that quickly drew more than 2 million views. His @XplodingUnicorn account grew by more than 400,000 followers in the following months. His jokes have been featured by USA Today, US Magazine, DailyMail.com, Metro.co.uk, Huffington Post, 9GAG, theCHIVE.com, CollegeHumor.com, various ABC and Fox TV news affiliates, and countless other TV, radio, and Internet outlets. His articles have appeared in Reader's Digest, The Federalist, and AskMen. He has been a guest multiple times on HLN's The Daily Share, and they haven't banned him yet. He can open most jars on the first try and is only a little afraid of the dark. He still can't load the dishwasher right.
or support indie stores by buying on