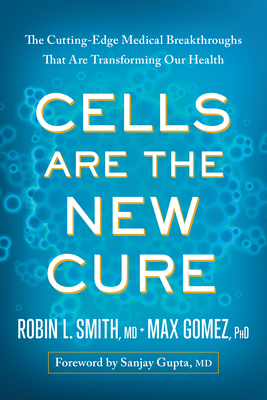 Cells Are the New Cure

The Cutting-Edge Medical Breakthroughs That Are Transforming Our Health

The future of medicine is happening now.

Revolutionary new science is providing cures that were considered science fiction just a few years ago--and not with pills, surgery, or radiation, but with human cells.

Promising treatments now in extensive clinical trials could have dramatic impacts on cancer, autoimmune diseases, organ replacement, heart disease, and even aging itself. The key to these breakthroughs is the use of living cells as medicine instead of traditional drugs.

Discover the advances that are alleviating the effects of strokes, Alzheimer's disease, and even allergies. Cells Are the New Cure takes you into the world of regenerative medicine, which enables doctors to repair injured and aging tissues and even create artificial body parts and organs in the lab. Cellular medicine experts Robin L. Smith, MD, and Max Gomez, PhD, outline the new technologies that make it possible to harness the immune system to fight cancer and reverse autoimmune diseases like multiple sclerosis, type 1 diabetes, and rheumatoid arthritis. CRISPR, a new technology for targeted gene editing, promises to eradicate genetic diseases, allowing us to live longer lives--possibly even beyond age 100 in good health.

Cells Are the New Cure takes you on a tour of the most exciting and cutting-edge developments in medicine. The content inside these pages could save your life or the life of someone you love.

Dr. Robin L. Smith is a global thought leader in the regenerative medicine industry, one of the fastest growing segments of modern-day medicine. She received her M.D. from Yale University and an M.B.A. from the Wharton School of Business. During her tenure as CEO of the NeoStem family of companies (NASDAQ: NBS), which she led from 2006 to 2015, she pioneered the company's innovative business model, combining proprietary cell therapy development with a successful contract development and manufacturing organization. Dr. Smith maintains a regular column for The Huffington Post. In June 2016, she was awarded the Women of Power and Influence Award from the National Organization for Women (NOW) and is the 2014 winner of the Brava Award, which recognizes top women business leaders in the Greater New York area. She was also a finalist for the 2014 EY Entrepreneur of The Year award for the New York area, recognizing entrepreneurs who demonstrate excellence and success in the areas of innovation, financial performance and personal commitment to their businesses and communities. As a business leader, entrepreneur, doctor and philanthropist, Dr. Smith is uniquely positioned to lead the global healthcare industry into the cellular future, where the cells of our bodies will stand as the foundation for a wide array of cures. Dr. Max Gomez has produced award-winning health and science segments for network stations in New York and Philadelphia. He has reported for Dateline, Today Show and 48 Hours. Over more than three decades, he's earned nine Emmy Awards, three NY State Broadcaster's Association awards and UPI's "Best Documentary" award. In addition to NYC's 'Excellence in Time of Crisis' for his September 11 coverage, Dr. Gomez has been singled out nationally for special award recognition by the Leukemia and Lymphoma Society and The National Marfan Foundation. He was also named the American Health Foundation's "Man of the Year." Dr. Gomez has helped organize and moderate three international scientific symposia on stem cells and cellular therapies, hosted by and held at the Vatican. Max also trains physicians nationally in public speaking and presentation, speaking to groups as diverse as the National Cancer Institute and the College of American Pathologists. He is the co-author of "Our Stem Cells - The Mysteries of Life and Secrets of Healing", a layman's guide to the medicine of the future, showcasing a wide array of emerging adult stem cell breakthroughs. Dr. Gomez also mentors undergraduate journalism students, as well as medical students and physicians who are interested in medical journalism. -
Loading...
or support indie stores by buying on