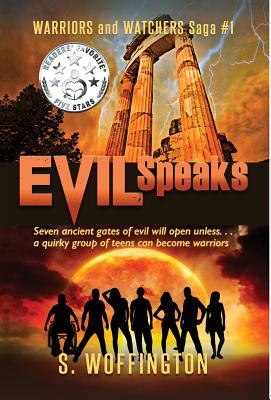 The ancient gates of evil will open, unless a quirky group of teens can become warriors . . .

Benny, fifteen, is solitary by circumstance more than choice: he counts each move to a new town as "a life." He's on Life Number Seven. His last He plans to run away from his paranoid mother, who's been on the run since the disappearance of his father when he was three. Benny has no memory of it, except for weird dreams of a firestorm and a hideous dragon. After a fight with his mother, Benny packs his bags. Boom The house explodes, catapulting Benny into a world he never imagined existed. The trail leads him to a gated Neoclassical building in the woods and to six teens he vaguely remembers: Kami is deaf, Amir is blind, Zuma is overweight, Layla is gorgeous but lazy, Chaz is in a wheelchair and Raj is as angry as the purple dagger-shaped birthmark running down the side of her face. These unlikely heroes share a common thread: Benny lost his father and they lost their mothers on the same day. The only clue to the mystery is Benny's grandfather, Domenico H. Adez, a strange and dangerous man.