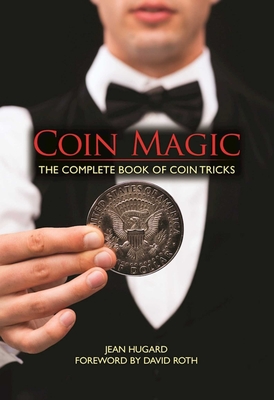 The Complete Book of Coin Tricks

Have some extra change rattling around in your pocket? Need a new party trick? Coin Magic: The Complete Book of Coin Tricks is your go-to reference for astonishing any audience—friends, family, people on the street, or even strangers sitting in a theater seat seeing your first public performance. Everyone will be amazed by your ability to captivate and charm.

Originally published in the 1930s, this highly acclaimed coin magic book from master of manipulation Jean Hugard is still a leading authority today for magicians everywhere. Whether you’re an active professional magician looking to add to your repertoire or just someone learning tricks for fun, this classic book is a comprehensive collection of coin magic—with more than one hundred tips and tricks to help you master the craft of illusion and sleight of hand. Additionally, this book includes dozens of illustrations to guide readers through tricks, making them much easier for them to grasp visually.

Included with this edition is a brand new foreword written by award-winning coin magician and expert on twentieth-century coin magic technique David Roth, making this edition of Coin Magic the quintessential authority on the subject.

Jean Hugard was an acclaimed magician during his time. He was born in Australia in 1872. Throughout his life, he performed magic around the world mainly in venues in Australia, New Zealand, and even in the United States. After he retired from performing, he settled down in Brooklyn, New York, to write more than thirty books on magic, including Money Magic, Encyclopedia of Card Tricks, and Houdini’s Unmasking. He became blind toward the end of his life but, in spite of his handicap, continued practicing and writing about magic. He died on August 14th, 1959.

David Roth is a well-known expert coin magician—arguably the best alive. He has performed around the world and has been featured on network programs like the David Letterman show and HBO’s “Magical Moments.” Additionally, he has written three books on coin magic, including Expert Coin Magic, and is closely associated with the world renowned magic store Fantasma Magic. He resides in New York City.
Loading...
or support indie stores by buying on