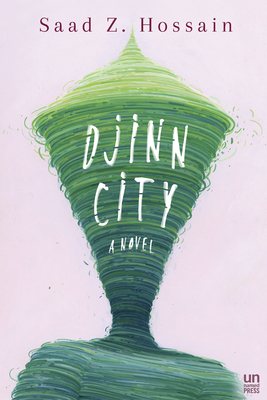 From the author of the cult classic Escape from Baghdad , comes one of The Guardian's Best Fantasy Books of the Year
Indelbed is a lonely kid living in a crumbling mansion in the super dense, super chaotic third world capital Of Bangladesh. His father, Dr. Kaikobad, is the black sheep of their clan, the once illustrious Khan Rahman family. A drunken loutish widower, he refuses to allow Indelbed go to school, and the only thing Indelbed knows about his mother is the official cause of her early demise: Death by Indelbed. But When Dr. Kaikobad falls into a supernatural coma, Indelbed and his older cousin, the wise-cracking slacker Rais, learn that Indelbed's dad was in fact a magician--and a trusted emissary to the djinn world. And the Djinns, as it turns out, are displeased. A hunt has been announced, and ten year-old Indelbed is the prey. Still reeling from the fact that genies actually exist, Indelbed finds himself on the run. Soon, the boys are at the center of a great Diinn controversy, one tied to the continuing fallout from an ancient war, with ramifications for the future of life as we know it. Saad Z. Hosscin updates the supernatural creatures Of Arabian mythology--a superior but by no means perfect species pushed to the brink by the staggering ineptitude of the human race. Djinn City is a darkly comedic fanlasy adventure, and a stirring follow-up to Hossain's 2015 novel Escape from Baghdad , which NPR called a hilarious and searing indictment of the project we euphemistically call 'nation-building.'

Saad Z Hossain is the author of two novels, Escape from Baghdad! and Djinn City. He lives in Dhaka, Bangladesh.
Loading...
or support indie stores by buying on