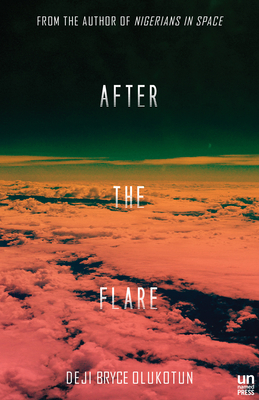 After the Flare (Nigerians in Space)

Philip K. Dick Award Finalist and Special Citation Winner
A catastrophic solar flare reshapes our world order as we know it - in an instant, electricity grids are crippled, followed by devastating cyberattacks that paralyze all communication. With America in chaos, former NASA employee Kwesi Bracket works at the only functioning space program in the world, which just happens to be in Nigeria. With Europe, Asia, and the U.S. knocked off-line, and thousands of dead satellites about to plummet to Earth, the planet's only hope rests with the Nigerian Space Program's plan to launch a daring rescue mission to the International Space Station. Bracket and his team are already up against a serious deadline, but life on the ground is just as disastrous after the flare. Nigeria has been flooded with advanced biohacking technologies, and the scramble for space supremacy has attracted dangerous peoples from all over Africa. What's more: the militant Islamic group Boko Haram is slowly encroaching on the spaceport, leaving a trail of destruction, while a group of nomads has discovered an ancient technology more powerful than anything Bracket's ever imagined. With the clock ticking down, Bracket - helped by a brilliant scientist from India and an eccentric lunar geologist - must confront the looming threats to the spaceport in order to launch a harrowing rescue mission into space. In this sequel to Nigerians in Space, Deji Bryce Olukotun poses deep questions about technology, international ambition, identity, and space exploration in the 21st century.

Deji Bryce Olukotun is the author of Nigerians in Space. His work has been featured in Vice, Slate, The New York Times, The Los Angeles Times, The Los Angeles Review of Books, the Wall Street Journal, National Public Radio, The Atlantic, Guernica, The Millions, World Literature Today, ESPN, and elsewhere. After the Flare is the second novel in the Nigerians in Space series.
Loading...
or support indie stores by buying on