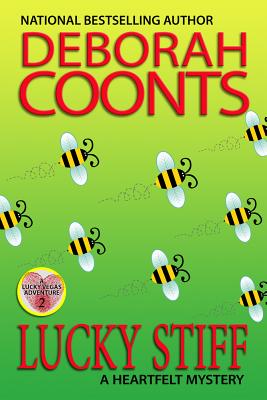 As Head of Customer Relations for The Babylon Resort, the newest addition to the excesses of the Las Vegas Strip, Lucky O’Toole is used to handling problems, but tonight is outstripping even her formidable skills. A tractor-trailer filled with millions of honeybees jackknifes in front of the Babylon, spewing swarms of enraged insects. The very naked District Attorney, Daniel “Lovie” Lovato, apparently involved in a threesome on the twelfth floor, locks himself out of his room and takes refuge in the laundry closet. And Lucky spies her assistant’s live-in lover, The Beautiful Jeremy Whitlock, in a heated spat with pretty, poisonous Numbers Neidermeyer, one of the less-than-savory odds makers in town.

When someone tosses Ms. Neidermeyer into the shark tank at the Mandalay Bay Resort/Casino as a late night snack, and DA Lovato pushes for a quick indictment against the Beautiful Jeremy Whitlock, Lucky is drawn into the murder investigation.

None of this would be so bad except that it’s fight weekend in Vegas. Tiny Tortilla Padilla, former middleweight Champion of the Universe, has been lured out of retirement for one last fight. He, his wife, and their sixteen children descend on the Babylon, along with various Hollywood luminaries, hookers from the far corners of the country, and hordes of really big gamblers.

To further complicate matters, Jordan Marsh, the current Hollywood hunk and one of Lucky’s longtime friends, shows up unexpectedly, imploring Lucky for help with a very personal matter. Lucky’s mother, Mona, the owner and Madam of the self-styled “Best Whorehouse in Pahrump”, has gotten the world’s attention by auctioning off a young woman’s virginity, and, naturally, she expects Lucky to save her from the fire. A handsome new French chef proves to be a handful while both he and Paxton Dane, the Gaming Control Board’s representative keep Lucky’s libido jumping.

Lucky is hanging by her fingernails when a compromising photograph of her lover, Teddie, and a young singer, runs in the morning paper—just after Teddie has announced he has been offered the job as the singer’s opening act on her upcoming world tour.

Deborah Coonts’ mother tells her she was born in Texas a very long time ago. Deborah isn’t so sure—her mother can’t be trusted. These things we are fairly certain of though: Deborah was raised in Texas on barbeque, Mexican food and beer. She is the author of WANNA GET LUCKY? a humorous romantic mystery set amid the glitz, glamor and gaudy of Las Vegas. WANNA GET LUCKY? was a NY Times Notable Crime Novel and double RITA™ Finalist and received several starred reviews as have the five sequels. Currently Deborah is stretching her writer muscles working on a women’s fiction/contemporary romance series set in Napa—the first novel, CRUSHED, is out now. To follow will be a dark thriller, a romantic suspense series featuring a female helicopter pilot, as well as the next Lucky adventure—all very different projects. So, if you see Deborah with a glass of Champagne in hand, you’ll understand. She can usually be found at the bar, but also at www.deborahcoonts.com