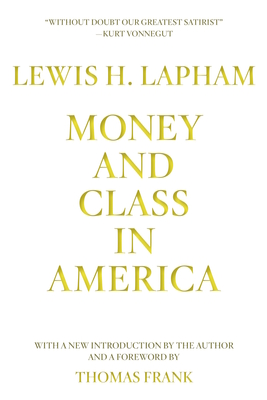 Money and Class in America

Extensively expanded and revised, with a new foreword by Thomas Frank

In the United States, happiness and wealth are often regarded as synonymous. Consumerism, greed, and the insatiable desire for more are American obsessions. In the native tradition of Twain, Veblen, and Mencken, the editor of Lapham's Quarterly here examines our fascination with the ubiquitous green goddess.

Focusing on the wealthy sybarites of New York City, whom Lewis H. Lapham has been able to observe firsthand in their natural habitat, Money and Class in America is a caustic, and often hilarious, portrait of a segment of the American population who, in the thirty years since the book was originally written, have become only further removed--both in terms of wealth and social awareness--from everyone else.

LEWIS H. LAPHAM is the founding Editor of Lapham's Quarterly and the editor emeritus of Harper's. His columns received the National Magazine Award in 1995 for exhibiting "an exhilarating point of view in an age of conformity," and, in 2002, the Thomas Paine Journalism Award. He was inducted into the American Society of Magazine Editors' Hall of Fame in 2007. His other books include Fortune's Child, Imperial Masquerade, The Wish for Kings, Hotel America, Waiting for the Barbarians, Theater of War The Agony of Mammon, Gag Rule, Pretensions to Empire, and The Age of Folly.
Loading...
or support indie stores by buying on