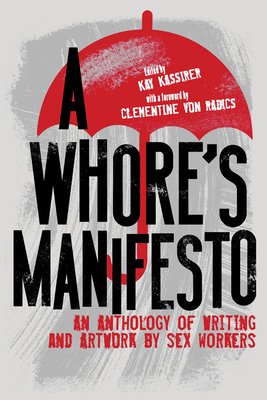 An Anthology of Writing and Artwork by Sex Workers

Sex work was once thought to be anathema to women’s liberation. Now, to some, we represent the tenacity of women’s struggles under patriarchy and capitalism—that is, at least, the white, straight, cis, able-bodied sex workers who don’t engage in actual sex with clients. These are the workers who get the glossy media profiles and get touted as feminist icons. But the red umbrella is wide and covers so many: escorts, sugar babies, strippers, session wrestlers, cam performers, fetish models, DIY queer porn stars, and the full range of gender, race, and ability. Our work and our identities are as vast and variable as the spectrum of sexuality itself. We do the work. In the streets, in the clubs, in hotel rooms, and in play party dungeons. We make dreams come true so we can afford a place to sleep. We do business in a marketplace that politicians and police are constantly burning down for our “own safety and dignity.” We have high heels and higher anxiety. This isn’t a collection of sob stories of heartbroken whores. This is a testament of life at ground zero of sexual discourse, the songs of canaries in the coal mines of sex, gender, class, race, and disability. We may dance on the table, but we still demand our seat at it. Sex workers of the world unite. This is A Whore’s Manifesto.

Praise For A Whore’s Manifesto: An Anthology of Writing and Artwork by Sex Workers…

"A Whore’s Manifesto brings aesthetic and experiential distinctiveness to themes around sex work as an occupation, an identity and a justice movement. This book evolves sex work authored literature as we know it." — Amber Dawn, author of How Poetry Saved My Life: A Hustler's Memoir

“A Whore’s Manifesto illuminates sex work—this most intimate and essential emotional labor—in all its contradictions, complexities, and conundrums." — Lola Davina, author of the "Thriving in Sex Work" series

"An amazing collage of sex worker stories that speaks to the heart of the business. These stories expose the true grit, diversity, heart, and stone cold reality of what it means to be in the world's most notorious business." — Akynos, Web model, burlesque performer, and producer

"Poet and activist Kassirer makes space for ‘a network of cis women, transwomen, and non-binary queers who perform a stylized version of womanhood for the gratification of clients’ to tell their stories via free verse, prose, and visual art, in a raw, emotional collection with the aesthetic of a basement poetry slam. Some pieces, like Peace’s self-encouraging ‘Late Nights and Lap Dances’ and Jessica Barry’s matter-of-fact ‘The Day Shift,’ speak directly about daily life as a sex worker. While some, like Mateo Lara’s ‘Ridden,’ speak to caution or fear, at least as many speak of sex work as difficult but powerful, like Lux Aeterna’s anthemic ‘Gods & Monsters’ and J. Mork’s ‘Margaretha,’ a success story of stepping out of the ‘straight job world’ to find her calling as a dominatrix, a version of the theatrical work she craves that allows for her neurodiversity. Other entries explore identity more generally, such as Robin Gow’s evocative religious fugues or the strange body horror of Gigi Genet’s ‘After Animorphs.’ While much of the poetry can feel awkward, heavy-handed, or overly self-conscious, this collection succeeds as a vehicle for workers who have so much stigma placed upon them to define themselves on their own terms and to show readers what they can do." — Publishers Weekly

Kay Kassirer is a spoken-word poet, organizer, and activist. Clementine von Radics is a poet whose confessional, conversational work has achieved a wide appeal among both traditional and non-traditional poetry audiences.
Loading...
or
Not Currently Available for Direct Purchase