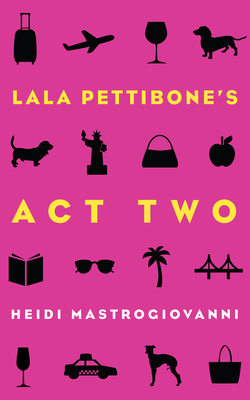 Lala Pettibone, a forty-something widow whose outrageous antics befit women half her age, has been imagining her sexy boss, Gerard, is as smitten with her as she is with him. Enter Gerard’s fabulous girlfriend from Paris. After spending the rest of the day drinking wine straight from the bottle, Lala attends the monthly meeting of her Greenwich Village co-op, where the residents are informed that a toxic wasteland has appeared in the building’s basement and everyone needs to pony up forty grand by the end of the week.
Ever the one to make limoncello out of lemons, Lala reluctantly decides to sublet her apartment and visit her Auntie Geraldine in Los Angeles. Good things come her way in sunny LA, including Dr. David, a handsome veterinarian, and inspiration to transform her previously rejected, uproarious, screenplay into a novel. Lala Pettibone's Act Two is a wonderfully hilarious, second coming-of-age novel. Bridget Jones has absolutely nothing on Lala in the Late-Bloomer-With-Maybe-Lots-of-Potential Department.

"Heidi Mastrogiovanni's debut novel is a masterful, spirited adventure. Whether Lala Pettibone is adoring her rescue dogs, processing life's curveballs or drooling over a new lust interest, she'll win your heart and keep you laughing. A tale that proves blooming after heartache is more than possible, you may just discover more of yourself in the process. Brava, Ms. Mastrogiovanni! The world needs more Lala Pettibone." - August McLaughlin, founder of Girl Boner

Heidi Mastrogiovanni is a dedicated animal welfare advocate who lives in Los Angeles with her musician husband and their three rescued senior dogs, Chester, Maggie, and Squeaks. She loves to read, hike, travel, and do a classic spit-take whenever something is really funny. Heidi is fluent in German and French, though she doesn’t understand why both those languages feel they need more than one definite article. Heidi is a graduate of Wesleyan University and was chosen as one of ScreenwritingU’s 15 Most Recommended Screenwriters of 2013.  The comedy web series she writes and produces, Verdene and Gleneda, was awarded the Hotspot on the Writers Guild of America’s Hotlist. Lala Pettibone’s Act Two, Heidi’s first published novel, embraces the themes found in all of her work... It’s never too late to begin again, and it must be cocktail hour somewhere.
Loading...
or support indie stores by buying on