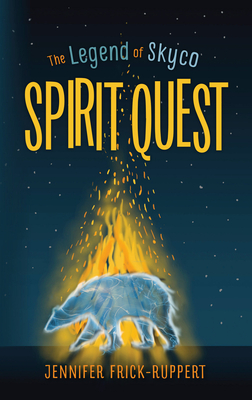 Spirit Quest (The Legend of Skyco #1)

Skyco, an Algonquin boy, is heir to the great chief Menatonon, but he has much to learn before he can take his place within the tribe. He studies with the shaman Roncommock, who teaches him how to enter the spirit world and communicate with spirits and other animals, while he also learns practical skills of hunting, fishing, and starting a fire from other men in his village. But learning to throw a spear with an atlatl and shoot arrows with a bow are just precursors to the ultimate test, the husquenaugh, when he is challenged to use his hard-earned skills to survive the harrowing life-or-death ritual.

Dr. Jennifer Frick-Ruppert earned her Ph.D. in Zoology from Clemson University and is currently the Dalton Professor of Biology and Environmental Science at Brevard College in western North Carolina. Originally from South Carolina, she grew up with a love of nature and the outdoors. Her other two books are Mountain Nature: A Seasonal Natural History of the Southern Appalachians and Waterways: Sailing the Southeastern Coast. Both are about southeastern biodiversity.

Lorna Murphy is an author and illustrator of children's books based in Suffolk, UK. She grew up on the coast but has been landlocked for 20 years. She still misses the sea. After 16 years working in the public sector, she decided enough was enough and signed up to study illustration, at the Cambridge School of Art in the UK. It was here that she discovered the world of illustrated books and has been hooked ever since. Since graduating with an MA in Children's Book Illustration, she has worked as a freelance illustrator of children’s books for clients such as MacMillan and Burroughs Wellcome as well as many independent publishers. She feels very privileged to be living and working in a world of books and the children who love them. When not working as a freelance illustrator, she spends her time creating her own books, writing, critiquing, and attending any event with the words: 'book' or 'illustration' in the title. She can often be found wandering around the East Anglia with a sketchbook or camera in search of inspiration.