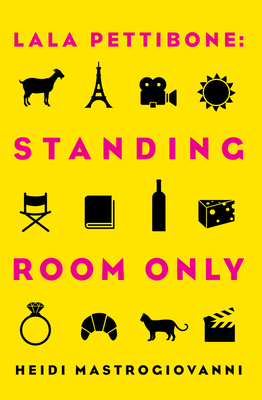 Lala's done it: her failed-screenplay-turned-successful-novel is about to be made into a movie. In Paris! With a Hollywood bad boy as the lead!

But the City of Lights can only offer so much respite from the petrifying decisions that await Lala back in the City of Angels. It’s an ocean away from her boyfriend, David, with whom she is becoming alarmingly close (as in, tying-the-knot-close).

For every leading lady who got her start later in life, Lala Pettibone screams a hilarious “Yes!” to joie de vivre at any age.

Heidi Mastrogiovanni is a dedicated animal welfare advocate who lives in Los Angeles with her musician husband and their three rescued senior dogs, Chester, Maggie, and Squeaks. She loves to read, hike, travel, and do a classic spit-take whenever something is really funny. Heidi is fluent in German and French, though she doesn’t understand why both those languages feel they need more than one definite article. Heidi is a graduate of Wesleyan University and was chosen as one of ScreenwritingU’s 15 Most Recommended Screenwriters of 2013.  The comedy web series she writes and produces, Verdene and Gleneda, was awarded the Hotspot on the Writers Guild of America’s Hotlist. Lala Pettibone’s Act Two, Heidi’s first published novel, embraces the themes found in all of her work... It’s never too late to begin again, and it must be cocktail hour somewhere.
Loading...
or support indie stores by buying on