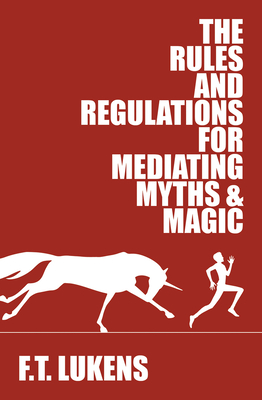 The Rules and Regulations for Mediating Myths & Magic

Desperate to pay for college, Bridger Whitt is willing to overlook the peculiarities of his new job—entering via the roof, the weird stacks of old books and even older scrolls, the seemingly incorporeal voices he hears from time to time—but its pretty hard to ignore being pulled under Lake Michigan by... mermaids? Worse yet, this happens in front of his new crush, Leo, the dreamy football star who just moved to town. Fantastic. When he discovers his eccentric employer Pavel Chudinov is an intermediary between the human world and its myths, Bridger is plunged into a world of pixies, werewolves, and Sasquatch. The realm of myths and magic is growing increasingly unstable, and it is up to Bridger to ascertain the cause of the chaos, eliminate the problem, and help his boss keep the real world from finding the world of myths.

Praise For The Rules and Regulations for Mediating Myths & Magic…

Anticipation for Rules and Regulations:

“FIVE STARS…Ghosts & Ashes continues the adventures of the star host, Ren, as he comes to grips with his power and searches for his place in the cosmos. This is a rollicking adventure that blends elements from westerns, sci-fi, YA, and romance into a cohesive page-flipping thrill ride.” – Foreword Reviews

“Fans of queer sci-fi adventure, this is the series for you. Start at The Star Host and plow right on through Ghosts and Ashes in one go. Told in Lukens’ no-nonsense prose, this story will draw you in and not let go.” – Teen Vogue

"Add (The Star Host) to young adult sci-fi collections, and expect readers to eagerly anticipate the next book in the series.” — School Library Journal

F.T. Lukens is an award-winning author of young adult fiction who holds degrees in Psychology and English Literature. A cryptid enthusiast, F.T. loves folklore and myths specifically the weird and wonderful creatures of North America. She also enjoys sci-fi and fantasy television shows, superhero movies, and writing. F.T. lives in the mountains of North Carolina, a perfect area for sasquatch sightings, with her husband, three kids, and three cats.