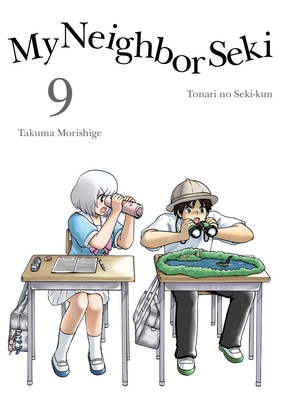 Seki transforms himself into an old lady selling cheap candy, an avant garde artist who uses a very unusual medium, and even a marionette who mimics his own antics in miniature. Will Seki’s artistic abilities land him a job as a manga artist?

Praise For My Neighbor Seki, 9…

“The games and projects that Seki comes up with are outrageous and amazing, and Yokoi’s reactions to them are hilarious. It’s a very fun series all around”. — Lori Henderson, Good Comics for Kids

Takuma Morishige was born in Miyazaki prefecture back in 1978. A professional comic artist, he earned an engineering degree from the University of Hiroshima. While Morishige has been working as a comic artist since 2001, he is best known for his work on My Neighbor Seki and for being the brother to the award-winning comic artist Akiko Higashimura. Morishige even appears as a character in Higashimura's autobiographical comic "Himawari..."

In 2000 Morishige's debut project, Life Arts, was a finalist selection for the Chiba Tetsuya Comic Award. He would then turn his attention towards manga creation full-time in 2001. He has since developed six series, most of them being comedies.
Loading...
or support indie stores by buying on
(This book is on backorder)