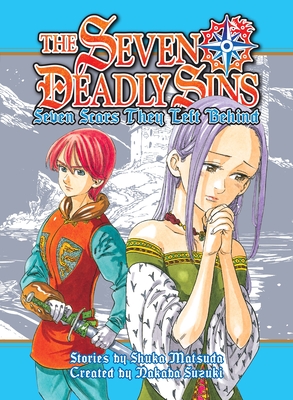 Seven Scars They Left Behind

The Seven Deadly Sins—a legendary order that once served the Kingdom of Liones as the mightiest of its Holy Knights—stand accused of treason and have fled the realm. Princess Margaret and young Gilthunder, the slain commander Zaratras’ son, know the terrible truth about the betrayal but dare not speak of it, not even to each other.

The aftermath of the event that shook Britannia comes to life in seven prose chapters that provide a superb introduction to the rich world of the original comic and satisfy longtime fans’ craving for more. Illustrated in a classic, warm style by the creator himself, Seven Scars They Left Behind walks the royal road of fantasy.

Shuka Matsuda (August 5, ???) is a veteran novelist who has written nearly twenty books since 2005. Most of Matsuda's books historically have been for tweens and teen-aged readers. While Matsuda's early works were original light novels and kids books, with increasing frequency Matsuda has been working on adaptations for popular shonen and shojo works for major publishers such as Kodansha, Shueisha and Kadokawa. Matsuda has adapted the following best selling manga into light novels - Attack on Titan, Seven Deadly Sins, My Love Story, and Phantom Thief Jeanne.
Loading...
or support indie stores by buying on
(This book is on backorder)