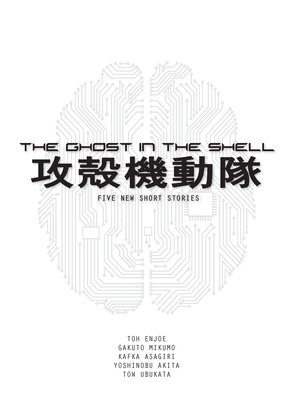 The Ghost in the Shell (novel)

Neither a utopia nor a dystopia, it’s still a world of nations at strife, as dominated by corporations as ever. Technology hasn’t made humans nearly obsolete, but rather bettered us, if you will, attaching to our bodies and even brains as enhancements—for those who can afford it.

Comics artist Shirow Masamune’s vision of our coming society, animated to global acclaim and finally the basis of a major Hollywood production, branches out in five original stories by some of the most beloved SF novelists working in Japan today. A standalone collection, it requires no familiarity with the franchise to be enjoyed but is indispensable for fans for its thoughtful exploration of the series’ implications.

While reality may never become virtual, it will be increasingly networked and augmented. Navigate herein age-old questions about man that will return, not so ironically, in full force: What is the self? Is there such a thing as the soul?

Praise For The Ghost in the Shell (novel): Five New Short Stories…

“A spry, classy set of riffs on the ‘Ghost in the Shell’ universe, drawing on characters we know and extrapolating from the setting at large. . . .” —Ganriki

Tow Ubukata (1977-) is a renowned Japanese novelist and screenwriter. In 2003 Ubukata was awarded the Nihon SF Taishō Award by the Science Fiction Writers of Japan for his novel Mardock Scramble. He would then go on to win a number of awards for his novel Tenchi: The Samurai Astronomer in 2010 (Eiji Yoshikawa New Author Award for Literature, Japan Booksellers' Award, Seiichi Funahashi Literature Award). Since his debut, Ubukata has penned more than twenty novels and has written screenplays for a handful of television series and motion pictures.

Toh EnJoe (1972-) is Japanese novelist who has worked within the fields of science-fiction, speculative fiction and literary fiction. He like Ubukata is a multiple award winner, having collected the Akutakawa Prize (Harlequin's Butterfly), the Seiun Award (The Empire of Corpses) and the Phillip K. Dick Award (Self-Reference ENGINE).

Kafka Asagiri is a Japanese novelist and game writer. Formerly an office worker for an auto company, Asagiri would eventually shift focus towards writing for manga and video games to great success. Asagiri's Bungo Stray Dogs is published by Yen Press and inspired a popular animated TV series.
Loading...
or support indie stores by buying on
(This book is on backorder)