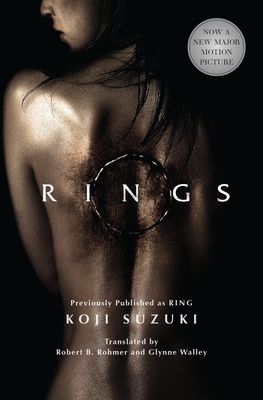 The Inspiration for the New Major Motion Picture RINGS

A mysterious videotape warns that the viewer will die in one week unless a certain, unspecified act is performed. Exactly one week after watching the tape, four teenagers die one after another of heart failure.

Asakawa, a hardworking journalist, is intrigued by his niece's inexplicable death. His investigation leads him from a metropolitan tokyo teeming with modern society's fears to a rural Japan--a mountain resort, a volcanic island, and a countryside clinic--haunted by the past. His attempt to solve the tape's mystery before it's too late--for everyone--assumes an increasingly deadly urgency. Ring is a chillingly told horror story, a masterfully suspenseful mystery, and post-modern trip.

The success of Koji Suzuki's novel the Ring has lead to manga, television and film adaptations in Japan, Korea, and the U.S.

"The success of the 2002 American movie The Ring, a remake of Hideo Nakata's Ringu, has excited interest both in the original film and in the novel on which it's based. As in a classic ghost story, fate singles out one, often innocent character as a scapegoat. But the misogynistic society that persecutes Sadako and her mother must ultimately bear witness to its sin-or perish. Anyone curious in how the Japanese see themselves will find this book a fascinating, and ultimately highly disturbing, experience." - Publishers Weekly

" With the release of The Ring (and its Japanese inspiration) on video (and talk of a sequel to the American film), this novel is sure to be much in demand among both mystery and horror fans."- David Pitt,  Booklist

"From its eerie opening to its chilling conclusion, this novel by the "Stephen King of Asia" will keep readers glued to its pages." - Library Journal

"But Suzuki is plowing a path that nobody else has traveled, as his 'Ring'-virus is born into an all-too vulnerable world. There are so many extremely clever riffs that never made it into either movie that readers aren't likely to notice how wide the road recently traveled is until they catch their breath and manage to look back." - Agony Columns

"Suzuki's ambitious trilogy does succeed, and it's hard not to be impressed with his aplomb in turning a straight supernatural horror mystery around into a piece of pure science fiction." - TIMES

Koji Suzuki is based in Tokyo but spends most of his time traveling. An avid motorcyclist, an accomplished yachtsman, and a respected authority on child-rearing, Suzuki is at the vanguard of modern horror fiction writers.
Loading...
or support indie stores by buying on
(This book is on backorder)