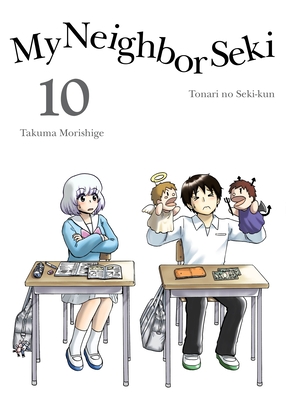 The ABC’s of Diversions

Seki’s desktop renovation is fit for a TV show. He adds turf just to create crop circles, and lures beetles and cicadas... until a larger predator shows up. Seki’s building a kaiju with a secret inside for the school fair. And can Rumi rescue Jun’s doll from the path of vigilantism...?

Takuma Morishige was born in Miyazaki prefecture back in 1978. A professional comic artist, he earned an engineering degree from the University of Hiroshima. While Morishige has been working as a comic artist since 2001, he is best known for his work on My Neighbor Seki and for being the brother to the award-winning comic artist Akiko Higashimura. Morishige even appears as a character in Higashimura's autobiographical comic "Himawari..." In 2000 Morishige's debut project, Life Arts, was a finalist selection for the Chiba Tetsuya Comic Award. He would then turn his attention towards manga creation full-time in 2001. He has since developed six series, most of them being comedies. In January 2014 My Neighbor Seki was adapted into an animated TV series further expanding his footprint globally as the series was available in Asia, North America, Europe and Brasil.
Loading...
or support indie stores by buying on