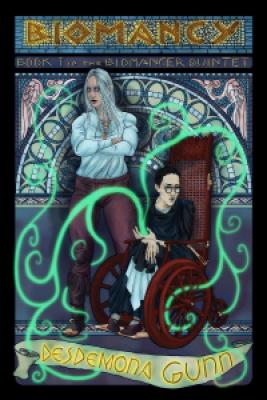 The disease had been ravaging Leana's body for years; her atrophied muscles were barely enough to lift her body from the chair and her sensitivity to the sun left her virtually trapped in the house. To make it worse, her twin sister was a constant reminder of what Lea could have been: strong, ex-military, attractive, and outgoing. She swore to fix herself and--once she developed the medical and magical skills--to fix others as well. With the aid of a rabbit named Amber, she set forth to create a new branch of magic to accomplish her goals, a branch of magic she called biomancy.

In Gunn's debut novel, she deftly takes us deep into a fantasy world peopled with nonhuman races to explore what it is that makes us human. Her world is detailed and the characters that populate it are complex and believable.

This first book in the Biomancer Quintet is a trans-humanist fantasy with a predominantly female cast of characters. If you use magic to restore your humanity, do you become more human, or do you end up sacrificing exactly what you were trying to rebuild?

Desdemona Gunn is a fantasty writer from beautiful Red Lodge, MT. She holds an Associate's Degree in Journalism, and is currently putting it to use writing fantasy novels. She was known for writing film and video game reviews. She is also openly transgender. Des is also a self-proclaimed 'tea maven, ' considering herself a master of Masala Chai. She finds home as Tea Master in a Montana tea bar.
Loading...
or support indie stores by buying on