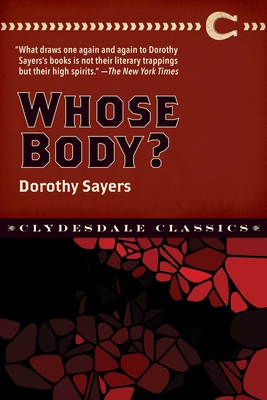 Praise for Dorothy Sayers: “Part of the Golden Age of mystery writers . . . Sayers is often credited as the most intelligent of them all”—The Guardian

In this new edition of Dorothy Sayers’s Whose Body?, readers are introduced to the star of her mystery series, Lord Peter Wimsey. In this first book of Sayers’s series, Peter, an amateur sleuth, is intrigued and mystified by the sudden appearance of a naked body in the bathtub of an architect. Meanwhile, another man, a financier, is reported missing, last having been seen leaving his house stark naked! Though originally thought to be two separate occurrences, as Peter investigates, he discovers the death and the disappearance are indeed related. As clues amass and become stranger and stranger, will Lord Peter be able to solve the mystery?

Follow along with Lord Peter Wimsey in this new and improved edition of Dorothy Sayers’s original debut novel Whose Body? With a beautiful new cover and enhanced text and footnotes, this novel will be sure to leave any mystery or historical fiction fan begging for more.

Dorothy Sayers was born in Oxford to Reverend Henry Sayers. She grew up to major in modern languages and then work in publishing and later as a copywriter. She published her debut novel, Whose Body? in 1923, and it became the first of her fourteen-part mystery series. After first creating a play based on her mystery series, she began writing more plays, including The Man to Be Born King, which faced much opposition for having the character of Christ speak in modern English. Sayers passed away in England in 1956.
Loading...
or support indie stores by buying on